eFOLDi, a UK-based scooter brand, announced this week it has attracted its first U.S. investor through its equity crowdfunding campaign on Crowdcube, which has secured more than £575,000. The funding round was launched last month and quickly raised its initial £350,000. Speaking about the U.S. investor, the eFOLDi team stated: 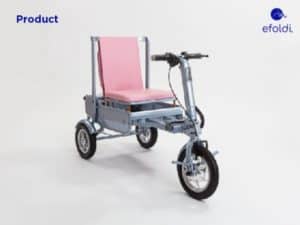 “We are fortunate to have eFOLDi users all around the globe, who would also like to be investors to share the future growth of our company. Unfortunately for some countries like the US, Canada, and Japan, investing in early-stage companies requires an ‘Accredited Investor’ status and certification. It sounds like a lot of hustle and very complicated. However, the feedback from our first US investor seems to prove otherwise.”

As previously reported, eFOLDi describes itself as an electric personal vehicle developed by SunTech UK Ltd, a research-driven UK business on a mission to bring true freedom to people with reduced mobility.

“Our award winning eFOLDi is an electric personal vehicle that can be neatly folded into a piece of luggage for easy transportation and storage, as well as being folded into a chair to rest on. At only 16kg with Li-ion battery and forged aluminium frame, the innovative design and patented invention enable this transformer- on-wheels to be extremely compact, lightweight and versatile.” 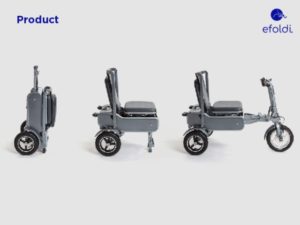 So far, eFOLDi has received various awards, including:

All funds from the Crowdcube round are going towards continuing the expansion and growth of eFOLDi. The campaign is set to close at the beginning of March.