Just a few weeks after launching its latest equity crowdfunding campaign on Seedrs, UK-based company that uses waste plastics to create strong, longer-lasting roads, MacRebur, has raised more than £2 million from over 1,200 backers. The round originally sought to raise £1.5 million and quickly secured the initial funding target. 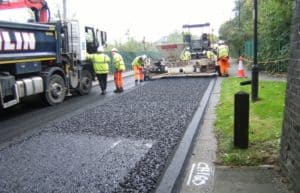 As previously reported, MacRebur claims to hold the UK and European patent on the method and recipe of mixing waste plastics such as bags, bottles, film wrapping, and cups, with bitumen, and its “magic formula,” to produce a new type of asphalt road material.  The company reported that its roads can now be driven on around the UK in places including Newcastle, Dumfries and Galloway, Durham, Enfield, Penrith and all over Cumbria, with trial roads being made and laid in Bahrain, Australia, New Zealand, and Turkey and are working with asphalt manufacturers to test and approve our products in these areas.

In a recent update, MacRebur announced it has made its way to New York and its next stop will be San Diego. Funds from the current crowdfunding round will go towards growth and expansion. It is set to close later this fall.