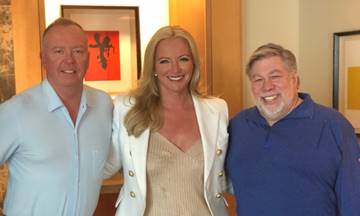 Tech icon and Apple co-founder Steve Wozniak is diving further into the blockchain arena by co-founding EQUI Global – a firm that is described as a “global game changer” that will disrupt venture capital. Wozniak, or the Woz, is joining several high profile individuals including founder Doug Barrowman and EQUI co-founder Baroness Michelle Mone OBE.

Barrowmen, a Scotsman, founded the Knox Group of Companies that is in the private equity, property, and wealth management space. Currently, assets under management top £3 billion.

Mone is the founder of Ultimo  Brands which was sold in 2014.  In 2017,  she launched a $250 million development of two residential towers and a retail complex in Dubai to the cryptocurrency community with Barrowman.

EQUI is a tech focused VC fund which that will incorporate a blockchain back end that will offer a tradable token or “EquiToken.” The EQUI Fund is described as “bridging the gap between traditional venture capital and cryptocurrency.”

Wozniak is expected to will head up the investments – searching for the “tech starts of tomorrow.”  He will then bring them to the table and the board of serial entrepreneurs will mentor them to help drive success. While 80% of the investment will be focused on tech, including blockchain, the remainder will be focused on non-traditional assets such as collectibles or real estate.

The EQUI Fund, and associated EquiToken – an Ethereum based crypto, will trade on external crypto exchanges. Aimed at sophisticated investors, the Fund will be open ended and will allow access to a broader market in a “non-institutional way.” 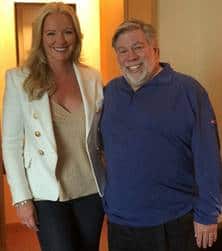 Wozniak commented that he gets pitched ideas very single day and he says no. Reportedly, this is only the second time in 20 years that Wozniak actually said yes.

“… I want to be a part of this. It has to be something I really believe in and I really believe in EQUI,” stated Wozniak.  “There are so many great ideas because I sit down and think, ‘what could I think of doing?’ And it’s usually based upon ‘what do we have today in our life and how could we modify it, make it a little better or radically change it?’ and I don’t come up with many answers. But then I run it at other people and almost everybody has one answer for one thing that I think ‘woah, I never would have thought of that’ so it’s out there in the technology field.”

Wozniak said he believes they have found something very special in EQUI.

“I’ve since enjoyed giving my feedback to the technical side of the initiative and will very much be an actively involved proud co-founder. I am very pleased that my business partners are the respected Michelle and Doug.  They are both very determined people who have both achieved what few people can do”.

Prominent entrepreneur Lady Mone OBE said “Woz has always been my business icon and it’s a dream come true to be working with him at EQUI.”

“It’s going to be very exciting. Ultimately, our mission is to seek, support and fund the blockchain and tech stars of tomorrow.”