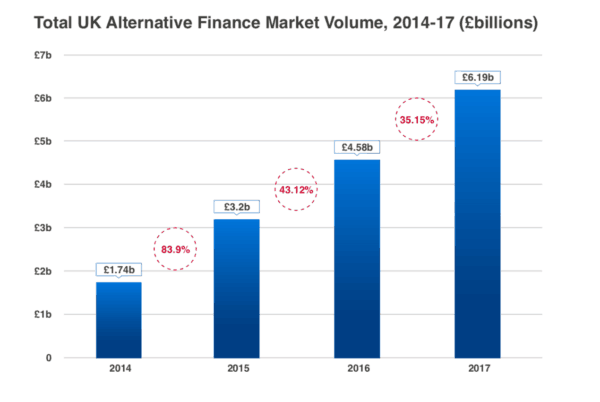 The Cambridge Centre for Alternative Finance (CCAF) has published its annual report on the UK alternative finance for 2017. This is the 5th UK benchmarking report CCAF has published.

According to the research, overall the sector of finance grew 35% versus the year prior to £6.2 billion as certain categories became more established and institutional money played an increasingly important role. While the rate of growth has slowed this represents the 7th year in a row of growth for UK alternative finance.

The UK is recognized as a leader in Fintech including online capital formation. Most of the research delivered by CCAF captures the various categories of online lending and crowdfunding.

CCAF notes that peer to peer (P2P business lending maintained the lead as the largest category of alternative finance. During 2017, approximately £2 billion was originated in this category growing by 65% year over year.

The benchmarking report highlights the fact that P2P business lending is vital in its support of small business and thus the UK economy.

Institutional money helped to drive sector growth. In 2017, 40% of P2P business lending came from institutions including pension funds, asset managers, banks, and more. This is an increase from 28% in 2016. 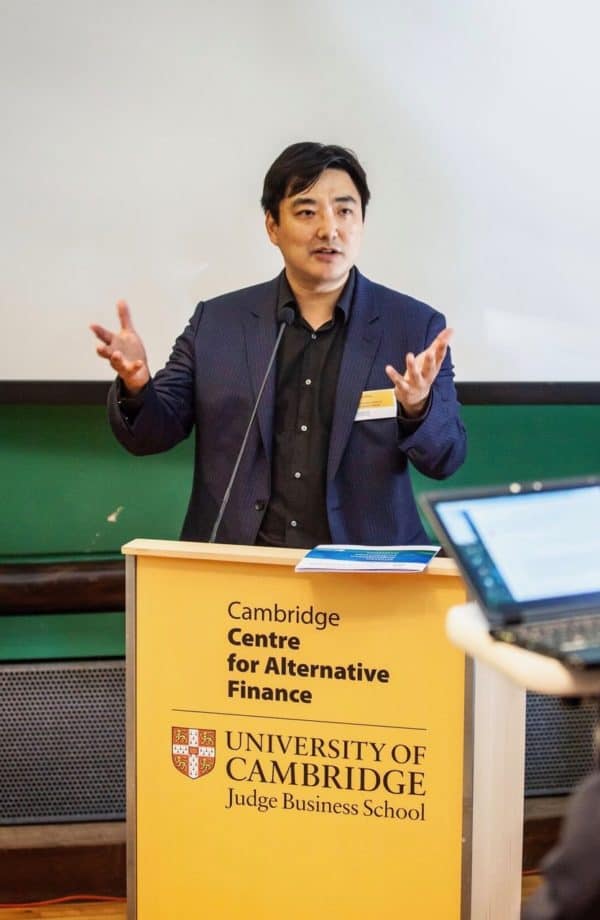 A similar phenomenon is taking place in equity crowdfunding where 49% of funding was provided by professional investors, like angels or venture capital funds, who co-invest alongside retail investors.

Commenting on the research, Bryan Zhang, Executive Director of the Cambridge Centre for Alternative Finance, said the report reflects an industry that is playing an increasingly important role in “helping consumers and businesses access finance, whilst growing to become more diversified, sophisticated and institutionalized.”

Interestingly, real estate crowdfunding jumped dramatically by more than 200%. While a small category of alternative finance at just £211 million the growth was significant.

Other points of interest from the UK report:

Crowdfund Insider spoke to Tania Ziegler, Team Lead on Research at CCAF, about this years UK benchmarking report. Asked about the impact of Brexit on the alternative finance market, she explained that their survey included a series of questions related to significant ‘risk factors’ and their impact on Fintech firms.

“Whilst we did not specifically ask platforms about Brexit, we can infer that continued Brexit uncertainty is of significant concern,” said Ziegler. “From our findings this year, we know that UK-based firms are increasingly pursuing global strategies and are actively operating beyond the UK borders and into Europe. We also noted a number of European platforms with significant activity here at home.” 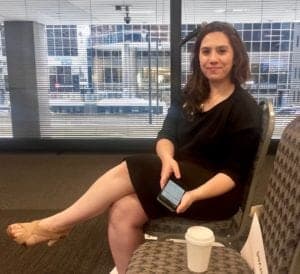 Ziegler explained that while cross-border activity is currently somewhat limited, there are specific models where cross-border investment is on the rise:

“For instance, we observed greater cross-border flow in the P2P Consumer Lending space, especially as related to investment from abroad going to UK-based borrowers. As we get closer to Brexit, we remain unsure how this might impact a platform’s ability to service clients from Europe who wishes to invest in the UK. The European Commission has taken steps to further harmonize Crowdfunding activities, so we shall see how our exit will impact our ability to service clients in member-states. In the next year, we will be monitoring this very closely.”

Asked about the slowing growth, Ziegler qualified this as indicative of a sector of finance that is becoming more established while the British economy is slowing:

“We see incumbent firms growing steadily, especially as related to Business-focused funding,” said Ziegler. “In fact, we see incumbent firms increasing their market share within their sub-segment of the Altfin market. Unlike previous years, we also didn’t see a significant number of firms winding-down or leaving the AltFin market.”

As we noted above, real estate crowdfunding stood out with its performance. Ziegler said the rapid growth seems to be related in part from an increase in deal-size, and an increase in new deals, with real estate development growing across the UK.

“We also noted significant cross border activity, both with investors from abroad taking advantage of real estate opportunities in the UK, and vis a versa.  In recent years, we also saw changes to Buy-to-Let rules. Some of the platforms surveyed in our study indicated that this change may actually make Real Estate Crowdfunding an attractive option for retail investors that want to take advantage of income-baring property assets.”

The importance of online lending for UK SMEs appears to be irrefutable. As most people understand, developed economies are fueled by SME growth. The importance of access to capital for small business can not be underestimated and nearly 70% of alternative finance went to SME borrowers or issuers.

“Loan-based Crowdfunding is of particular importance, with debt models accounting for almost ninety percent of funds to businesses. In 2017, for instance, the P2P Business Lending model was equivalent to nearly 30% of all New Loans to Small Businesses in the UK. We also saw Invoice Trading grow faster than any other loan-based model this year. With traditional bank lending relatively stagnant, we expect that alternative finance will only increase in importance,” Ziegler stated.

All of the data was compiled with the support of the UK alternative finance industry, importantly the UK Crowdfunding Association (UKCFA) and the UK Peer to Peer Finance Association (P2PFA) backed the research.

As the UK is a global leader in Fintech, there is much to learn for other jurisdictions seeking to boost their economy as all forms of finance migrate to the internet and opportunities for innovation arise. 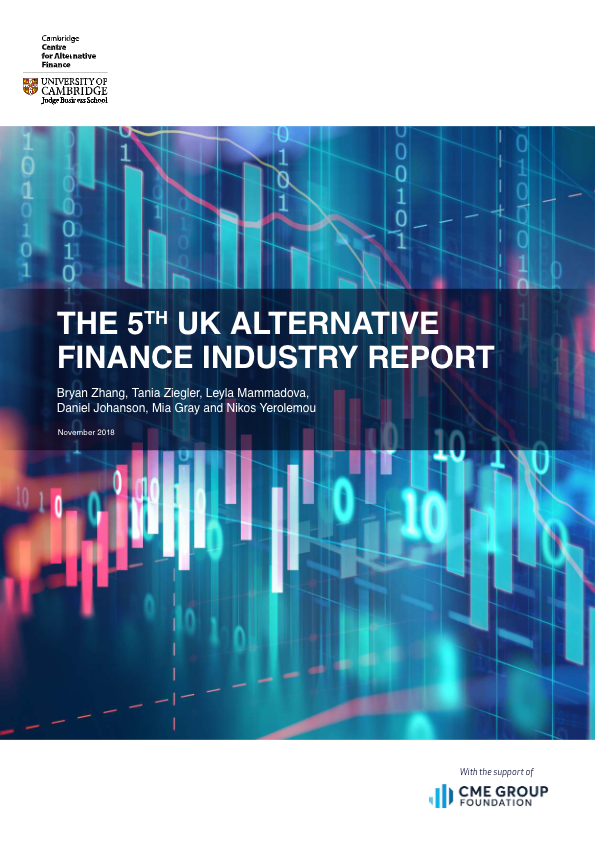