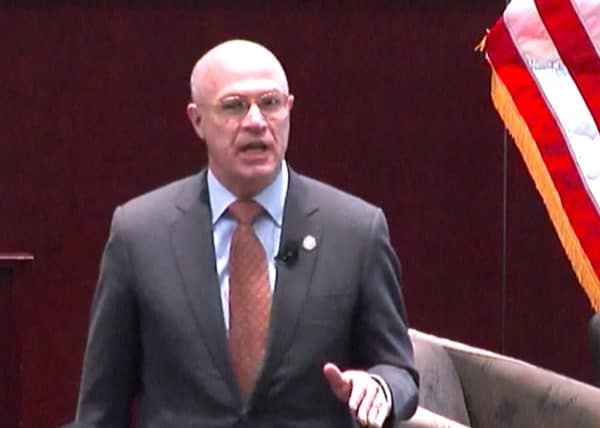 Former CFTC Chair  J. Christopher Giancarlo has joined the Chamber of Digital Commerce’s Board of Advisors.

The Chamber of Digital Commerce (CDC) bills itself as, “the world’s first and largest trade organization for the blockchain and digital asset community.” It is headquartered in Washington, DC.

Giancarlo chaired the CFTC for two years before departing his post in July of this year. He also worked as Commissioner of the CFTC from 2014 until his departure, which came about due to the expiry of his five-year term.

The CFTC oversees derivatives markets in the US.

Giancarlo was dubbed “Crypto Dad” after he testified in favour of innovation at the Senate Banking Committee Hearing on Virtual Currencies in February 2018.

According to the Chamber of Digital Commerce:

“Giancarlo is a renowned blockchain technology advocate and key contributor to the global discourse on cryptocurrencies and digital assets. During his tenure as chairman of the U.S. Commodity Futures Trading Commission (CFTC), the agency published primers on virtual currencies and smart contracts, and the first bitcoin futures contracts were offered. The CFTC also launched LabCFTC to provide better tools and resources to the agency. Perhaps most important for the industry, Giancarlo called for a ‘Do No Harm’ regulatory approach towards blockchain technology.”

Giancarlo expressed excitement about his involvement with the CDC Advisory Board:

“The Chamber is at the epicenter of this emerging field of technology that can only be described as a movement…I’m looking forward to joining this group of Advisory Board leaders, from many fields and areas of expertise, whom are already working to promote the adoption of this transformative technology. It is my hope that together we can streamline and modernize the regulatory environment and encourage further blockchain innovation.”