Micree Ketuan Zhan, co-founder of Bitmain, the world’s largest manufacturer of cryptocurrency mining hardware, has promised in an open letter to take legal action against colleagues who “dismissed” him suddenly at the end of October. 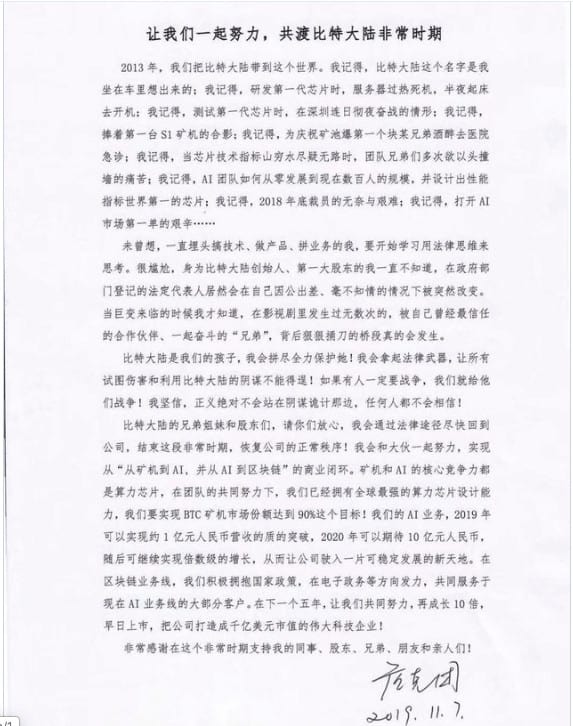 According to a translation of the letter obtained by The Block, Zhan stated that he was blindsided by his ouster:

“I have never thought that as a person focusing on technology and product, I have to start thinking from legal perspectives. It was embarrassing that as a Bitmain co-founder, the biggest shareholder, and a registered legal representative, I got ousted without any knowledge in this coup while on a business trip.”

He said the betrayal felt dramatic:

“I didn’t realize until then that those scenes in TV shows, where you get stabbed on your back by those partners you trusted and ‘brothers’ you fought together with, can really happen in real life.”

Zhan promised to, “return to the company as soon as possible through legal methods,” and proceed with his plans for the company, including plans to move the company towards AI and supercomputing:

“We want to achieve the goal of 90% market share of bitcoin miner manufacturing market! Our AI [artificial intelligence] business can achieve a qualitative breakthrough of about 100 million yuan [~$14.25 million] in revenue in 2019, and can expect 1 billion yuan [~$143 million] in 2020.”

Cryptocurrency mining is a process where hundreds of thousands of computers across the world share a database and simultaneously process, settle and encrypt transactions on thousands of identical ledgers.

The process is acutely energy-intensive and is derided by the ecologists.

Cryptomining advocates say that the energy consumption is necessary because, so far, mining is the only way to protect “decentralized” networks because the distribution and replication make them too expensive to attack.

On October 29th, Zhan circulated an email to employees at Bitmain stating he had, “decided to dismiss (Micree) Ketuan Zhan from all roles.”