The former president of the European Central Bank, Jean-Claude Trichet, told an audience at Caixin’s conference in Beijing last month that he doesn’t think cryptocurrencies should replace standard ones, S 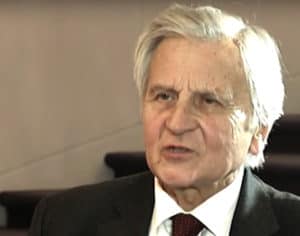 “I have great doubts of keeping control of monetary value in [the cryptocurrency] domain,” the French economist said while speaking on a panel.

Trichet, who was boss of the ECB from 2003 to 2011 after leaving a ten-year post as governor of the Bank of France, also spoke out against Bitcoin, which is often depicted by fans as a mechanism for disrupting inequitable financial orders and countering incompetence at Central Banks.

“I am strongly against bitcoin, and I think we are a little complacent,” Trichet warned. “The [crypto]currency itself is not real, with the characteristics that a currency must have.”

Trichet said the purchase of cryptocurrencies is, “in many respects pure speculation”:

“Even if [the cryptocurrency] is supposed to be based on underlying assets, I am observing a lot of speculation. It is not healthy.”

He also reportedly said he is, “very much against” Libra, Facebook’s recent attempt at creating a private global cryptocurrency for use by the network’s 2.4 billion users.

Since Libra was announced last May, there has been an outcry from global regulators concerned about a currency system being run by an unelected entity.

Many believe that, if implemented too fast and too wide, Facebook money could cause people in regions with weak currencies to abandon local money in favour of Libras. This would spell disaster for local currencies and the economies tied to them.

Chinese officials also worried publicly that the basket of currencies and short-term bonds used to back libras might favour USD.

Not long after China voiced these concerns, Libra officials announced the libra basket would contain no Chinese currency whatsoever.

Trichet seemed to suggest in Caixin that any global currency should be backed by the International Monetary Fund’s (IMF’s) Special Drawing Rights basket.

“In the so-called new stable international currencies … the SDR would be the right basket.”

According to the IMF:

“The SDR serves as the unit of account of the IMF and some other international organizations.”

“The SDR is neither a currency nor a claim on the IMF. Rather, it is a potential claim on the freely usable currencies of IMF members. SDRs can be exchanged for these currencies.”

“The SDR is an international reserve asset, created by the IMF in 1969 to supplement its member countries’ official reserves. So far SDR 204.2 billion (equivalent to about US$291 billion) have been allocated to members, including SDR 182.6 billion allocated in 2009 in the wake of the global financial crisis. The value of the SDR is based on a basket of five currencies—the U.S. dollar, the euro, the Chinese renminbi, the Japanese yen, and the British pound sterling.”

Cryptocurrencies took their first run at “going mainstream” in 2018, when the price of one Bitcoin rose in the latter half of the year from $3500 USD to $20 000.

Even before the crash, there were many stories of fraud and questions about mediocre tech circulating regarding cryptocurrencies.

Since the crash, a number of lawsuits have been launched alleging widespread market manipulation in crypto trading systems, which, until recently, were minimally regulated.

For some time, believers and major crypto holders have been trying to portray cryptocurrencies as the future of money. There are even semantic campaigns afoot trying to encourage the public use of terms like “digitization” to refer to cryptocurrencies.

Trichet reminded the audience in Beijing that money has already been digital for some time:

“We are already in a domain which has much less physical currency…Whether we are in a domain where that will be replaced with crypto? I have doubts there.”