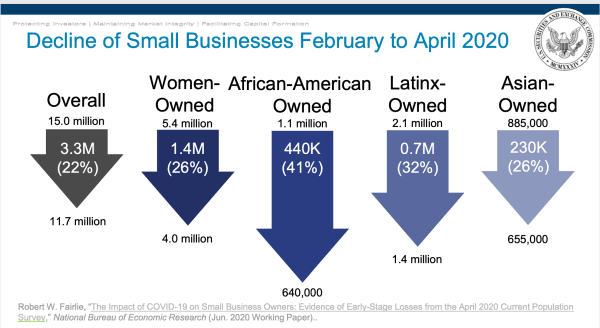 Earlier this week, the Securities and Exchange Commission (SEC) Small Business Capital Formation Advisory Committee met to discuss how capital markets are serving underrepresented segments of entrepreneurship and small businesses. As we all know, every early-stage firm needs to have access to capital to thrive and survive. Yet certain segments, including minorities and women, struggle to gain access to capital due to a plethora of reasons and myopic rules.

A presentation delivered by the Office of the Advocate for Small business Capital Formation, provided some data points highlighting the challenge.

Regarding female investors, the Advocate shared that 29.5% of angel investors are women and just 11% of VCs are women. As well, 71% of VC firms have no female partners.

The COVID pandemic has hit underserved segments hard. The Advocate shared the decline of small businesses during the period from February to April 2020:

Obviously, COVID is having a negative impact on all small businesses but underserved segments have been undermined on a disproportionate basis. While government programs have helped, more needs to be done. Access to capital via digital funding portals and participating broker-dealers can supplant these government programs.

During a presentation, Rodney Sampson, a longtime crowdfunding advocate, founder of OHUB, a venture partner at Draper Goren Holm, Senior Fellow at the Brookings Institute, author and much more, advocated on behalf of improvements to the crowdfunding ecosystem including increases to the funding cap of Reg CF and Reg A+ as well as changes to the definition of an accredited investor.

Sampson was there at the beginning of the JOBS Act, working in partnership with others to the legislation passed into law, promoting the democratization of access to capital 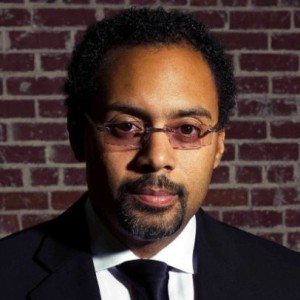 Sampson stated at the Committee meeting:

“I support an increase to the Reg CF and Reg A+ limits if we can assure a streamlined process. I support a revision to the ​definition of an accredited investor​ to include but isn’t limited to reducing the net worth and annual recurring income.”

He also supports funds that enable broader access to early-stage investments by individuals currently excluded by the system in place:

“I support ​pooled funds, and special purpose vehicles similar to syndicates or funds​, of non-accredited and accredited investors​…”

The SEC is in the midst of an exempt offering ecosystem review and has the potential to accomplish exactly what Sampson is advocating and, in fact, has proposed some important improvements to level the playing field a bit more. As well, the Committee is on the record advocating for many of these changes. Expectations are for any updates to be announced before the end of the fiscal year.

The SEC’s proposals are viewable here.