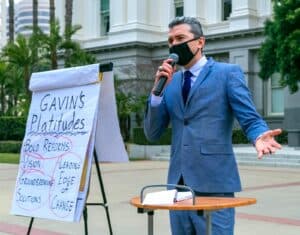 The legislation establishes the BankCal Program (BankCal) to provide Californians with zero-fee and zero-penalty transaction accounts and debit card services.

The legislation (AB 1177) establishes a nine-member board with members including public officials and staffed by employees of the State Treasurers Office.

According to the bill, California citizens are losing “hundreds of millions”  in fees to payday lenders and check cashing operations.

“With BankCal, more families will be able to keep the money they’ve earned, put food on the table, and build their savings. Creating a public option for banking and closing the racial wealth gap isn’t only a moral imperative, but it also creates greater financial security for all of our communities. This bill is a much-needed step to addressing the needs of the unbanked and underbanked and takes us one step closer to building more equitably after the pandemic.”

The legislation also mentions Fintechs or neo-banks – Chime is mentioned by name as the document highlights the need to serve the sector of the community that remains under or unbanked.

The creation of federal banking services for consumers has gained interest in Washington, DC following the appointment by President Biden of Saule Omarova to become Comptroller of the Currency – the top bank regulator. Omarova is an advocate of eliminating private bank accounts in favor of enabling accounts held by the government.