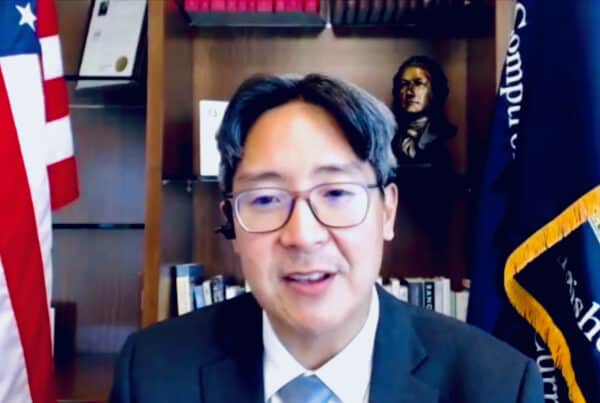 Acting Comptroller of the Currency Michael Hsu delivered a compelling speech today during a presentation at the American Fintech Council, Fintech Policy Summit. The AFC largely represents digital and neo-banks as well as non-bank lenders.

Hsu recently spoke at a Blockchain Association event where he slammed crypto as “fools gold.” Today’s presentation took a far different approach commenting on the importance of regulation and the highly fragmented regulatory environment that crypto firms, neobanks (synthetic banks), and digital banks must navigate.

Hsu was critical of Fintechs that “sit outside the so-called bank regulatory perimeter,” an understandable opinion:

“In the cryptocurrency space, the rapid growth in users and total market value has only been matched by the growth in scams and consumer complaints. “Move fast and break things” is a common mantra in tech. In the financial services context, it is important to remember that those “things” are people and their money.”

Regarding “synthetic banks” or SBPs – as he calls these firms, Hsu said these firms are “taking deposits, making loans, and facilitating payments” which are being reassembled digitally without adhering to needed regulatory oversight.

These firms, like crypto firms, state they are regulated but these are “half-truths,” according to Hsu, as they are being regulated “partially” or “selectively.”

But instead of pointing only at Fintechs, Hsu states that there is a wider regulatory shortcoming as there is no “comprehensive, consolidated supervision.”

“…no single regulator can see the whole picture and understand how a firm as a whole operates and takes risk. This warrants greater attention as crypto firms, especially the universals, get bigger, engage in a wider range of activities and risk-taking, and deepen their interconnectedness within the crypto ecosystem and with traditional finance.”

The solution is one that many Fintechs will embrace. In fact, many have been longing for a harmonised approach to compliance and regulation. Today, many US Fintechs must comply with both state and federal regulations with the federal oversight arriving from an alphabet soup of bureaus, commissions, and departments – a process that can crush the most determined Fintech entrepreneur.

“… we need to “level up” banking and finance. I am using “level up” in both senses of the term—that is, to increase something in order to remove a disparity, and to progress to the next level. We need to remove the disparity between the rights and obligations of banks and the rights and obligations of synthetic banking providers by holding SBPs to banking standards. At the same time, we need banks, Fintechs, and crypto firms to step up and make the business of handling other people’s money an ultra-high trust endeavor, where the needs of all customers are met in a reliable and consistently safe, sound, and fair way. By leveling up, we can safeguard trust in money, lending, and payments, and assure the public that financial innovation and change will not hurt consumers or endanger the financial system.”

Hsu was quick to point out that he is NOT defending legacy banks – a sector of finance that has been painfully slow to change and improve.  Banks must “level up” too and competition from Fintechs should be embraced while adhering to a robust and clear-cut compliance regime.

Currently, there is no single federal agency that is tasked nor dedicated to overseeing banks or Fintechs. This must change.

“It requires a change in how regulatory agencies, including state regulators, interact and in how we define success. It requires less regulatory competition and more cooperation, less parochialism and more teamwork, and less go-it-alone independence and more interdependence. It requires us to not cling to or fall back on the past, but to accept and adapt to the future. Put simply, we regulators need to level up, too.”

Neobanks, unlike chartered digital banks (and there are only a few), have been cowed by the regulatory ecosystem, Hsu says that “regulators have been unpredictable with regards to chartering new banks and approving Fintech acquisitions of banks.” Regulatory fragmentation can “obscure excessive risk-taking” as one agency may have oversight over one operational aspect but another may regulate a different function. Siloed responsibilities create inefficient regulation and inevitably overlap generating an uneccesary cost that is ultimately born by the consumer and businesses. A hidden rules and regulation tax.

While mentioning Binance and Tether by name, Hsu distills what is truly needed:

“To build long-term trust with the public and avoid BCCI/AIG-type events in the future, large, universal crypto firms – especially issuers of highly-circulated stablecoins – should embrace comprehensive, consolidated supervision. At the same time, federal and state bank regulators should prioritize the development of policies, staff, and supervisory approaches to bring such firms safely into the bank regulatory perimeter. This would clearly differentiate safe and sound crypto firms from those that are regulated only partially and have a history of control lapses, such as Binance and Tether.”

The key is consolidated supervision that hopefully streamlines, but maintains a rigorous regulatory process.

While Hsu is spot on, the chance of policymakers pursuing this path is little to none. Especially in the highly politicized environment that is exemplified by a split Congress that is battling a massive social spending bill that could completely alter the makeup of the country. As well, Hsu is most likely a temporary voice of reason as the Biden Administration, not prone to support Fintech innovation, has selected another individual to lead the Office of the Comptroller of the Currency.

The speech may be downloaded here.