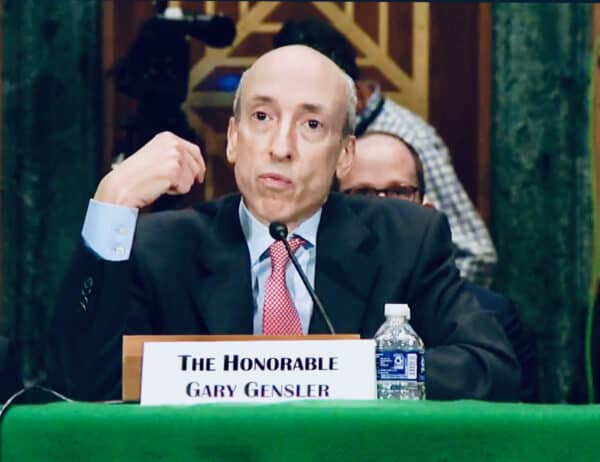 Several House Republicans have sent a letter to SEC Chairman Gary Gensler challenging his authority to demand climate disclosure reports from firms as well as other proposed rules, including ESG ambitions and areas like SPACs.

The letter points directly at the Supreme Court’s decision in West Virginia v. EPA that limits government actions that would be better managed via legislation.

“In West Virginia v. EPA, the Court invoked the ‘major questions doctrine’ to reject an attempt by the EPA to exceed its statutory authority. As the Court explained, ‘[p]recedent teaches that there are ‘extraordinary cases’ in which the ‘history and breadth of the authority that [the agency] has asserted,’ and the ‘economic and political significance’ of that assertion, provide a ‘reason to hesitate before concluding that Congress’ meant to confer such authority.’ Under this doctrine, an agency must point to ‘clear congressional authorization for the authority it claims.’ However, the EPA could not point to such authorization. Rather, the EPA ‘discover[ed] an unheralded power representing a transformative expansion of its regulatory authority in the vague language of a long-extant, but rarely used, statute designed as a gap filler.’ Notably, such discovery ‘allowed [EPA] to adopt a regulatory program that Congress had conspicuously declined to enact itself.’ As a result, the Court rejected the EPA’s attempt to so plainly exceed its statutory authority.”

The SEC’s push for greater climate disclosure clearly veers from its authority as it asserts a social agenda that does not adhere to its efficient markets and capital formation mission. Critics have noted that the SEC estimates the cost to be in the single-digit billions, but the Commission does not really have a handle as to how much climate disclosure will cost both public and private businesses as compliance will trickle down throughout the economy.

As there is a good chance that Republicans will regain the House this November, the SEC is said to be preparing for greater oversight following the midterm elections. The SEC’s recent actions have insiders labeling the current Commission as the most political in recent history as it pursues goals beyond its authority.

The letter includes an extended list of claimed transgressions due to SEC overreach, including rulemaking impacting:

The group of  Republican Representatives request a prompt response regarding their requests.

The letter is available here.