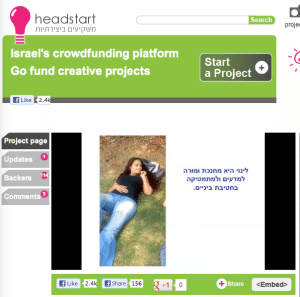 A young Israeli couple is raising the money to build their new home using crowdfunding, a method that until now was used mostly by politicians and celebrities.

On Thursday Linoy and Ohad Rotem registered their “Social Justice House” as a project on the Headstart website, which bills itself as “Israel’s crowdfunding platform.” Their goal is raise NIS 1 million.

Rather than taking out a mortgage that they say would barely cover construction costs and saddle them with high interest rates, the Rotems are offering to repay their debt by giving NIS 3,000 a month to charities chosen by their donors.