An organization affiliated with Occupy Wall Street has a crowdfunding idea aimed at reducing or eliminating crushing debts for private citizens.

Most Americans are accustomed to carrying debt, and when bad things happen in life sometimes that debt can become a serious burden.  When debtors default third parties will often buy that debt at pennies on the dollar and make an effort to collect on it, but what if the party buying the debt were to just forgive it?  Well, that is exactly what the Rolling Jubilee wants to do, and they want to use crowdfunding to do it. 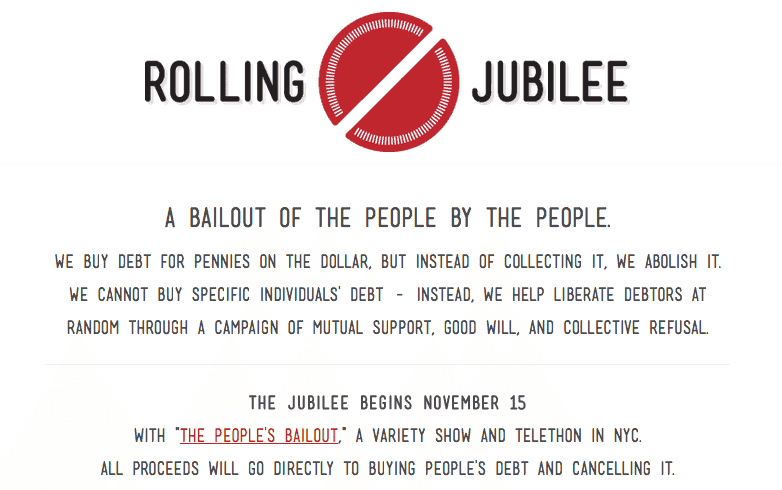 The Rolling Jubilee is a project by Strike Debt, who “seeks to abolish debt and reconstruct a just society where our debts and bonds are to one another and not the 1%.”

The Rolling Jubilee will take place at (Le) Poisson Rouge, 158 Bleecker Street, New York, NY on Thursday, November 15th 2012.  Tickets are on sale now and can be had for as little as $25, although attendees are encouraged to donate more to the cause.  The event will be livestreamed at rollingjubilee.org.

Regardless of the ethics of a movement like this, it comes at a time when millions of Americans are struggling with layoffs, hefty loans and upside-down mortgages.  Whether or not they can garner enough support to make a significant dent remains to be seen.

Here is a document that explains the thought behind the event in detail, produced by the organizers: