When Wellingtonian Anna Guenther needed a thesis topic for her masters degree, she chose the new phenomenon of crowd funding.

It was a good idea for a business, so she went ahead and started it. Last year, her website raised more than $750,000 for 175 projects. It is called PledgeMe and some are saying it is the type of thing that could, one day, mean the end of banks.

That is a little way off. At the moment it works like this: You have a project; say you want to make a video for your garage band. It costs $700, but you have no money. You home-make a little video of yourself doing your thing and write a couple of paragraphs about the extent of your awesomeness. PledgeMe will load this on its site, where it will sit on display alongside similar things. There is a 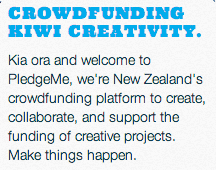 graph showing how much you have raised and how long your appeal has got to run. If people like the cut of your jib, they give you money. In return, you offer fun rewards – a copy of the video, a signed set of drumsticks, a song about them, for instance – each getting tastier as the amount given increases and limited only by your imagination and applicable legal limits. If your thing reaches its funding target, you get to keep the money. PledgeMe takes about an 8 per cent nibble of this. If it doesn’t fly, no-one gets anything and you are publicly humiliated.