So what is Krautreporter?  As  reported previously, The goal of the platform is to establish a Crowdfunding site for journalism in German speaking countries.

Now what is Lobbyplag? An open source European Union transparency tool on Lobbying.  They are crowdfunding on Krautreporter now.  Attempting to € 7,500 to fund this journalistic project.

The platform will have the following features:

– Data imports from ParlTrack and possibly other sources.

– Analyzing of analogies between lobby proposals and EU documents

– Integration of social media for collaboration and sharing

– All code will be available as free source software

– All data will be published under Open Data Comons Database License (ODBL) so anyone can use it.

Recently covered on the pages of Wired UK are the instances of Lobbyist influence on the Members of European Parliament (MEP).

LobbyPlag has already highlighted instances where text was copied from lobbying companies’ proposed amendments and inserted into MEPs motions verbatim, and their suggested deletions heeded — the changes to do not appear to have any benefit to EU citizens either — quite the opposite, in fact. The EU Commission has denied the accusations outright, with its spokesman Frederic Vincent telling German news service DW: “The commission never uses texts that possibly might have been handed to us by lobby groups.” 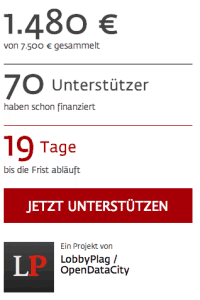 So the question is being asked:  How much influence do Lobbyists have on the European Union political process?

Enter LobbyPlag.  There is nothing like a good a bit of investigative journalism to dig through the political muck.  As we have all seen, time and again,  politicians fall pray to their lobbyist comrades.  This occurs in the United States, Europe and around the world.  So if you are in the mood to support the good fight and push back against influence peddling on the European continent.  Visit Krautreporter and support the LobbyPlag cause.