CrowdBnk is delighted to announce that it has partnered with QPR in the Community Trust to raise £30,000 for an exciting new community project charting the social history of QPR Football Club and the local area.
QPR is seeking donations to support funding of ‘The Story of QPR’ – an intergenerational media project in collaboration with the Octavia Foundation that will culminate in the production of a heritage website and documentary film around Rangers and the communities close to Loftus Road. As part of the project, 40 young people will be recruited and trained in film-making, media, research and heritage skills as part of the production of the film and other accompanying materials, including a podcast, soundtrack and website.

As a token of appreciation for their donation, supporters will receive exciting rewards ranging from an exclusive breakfast at the club’s training ground and watching QPR’s first-team train, to having their name appear on the final DVD! 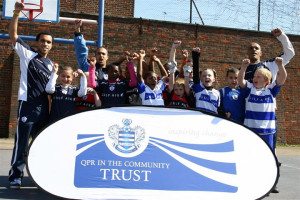 “This is a unique project as it will engage with generations of R’s fans as well as local residents, past and present, and those with roots in the area.
“This project is about identity, local social history and, most importantly, offering young people the chance to learn new skills.
“However, to make the project a success we have partnered with CrowdBnk as we need to fundraise a further £30,000. This is where we need our loyal supporters to make the project possible. We have a range of donation levels that we hope will be of interest to any QPR fan.”

Ayan Mitra, CEO of CrowdBnk, said “we are very excited to be working with QPR Trust on this amazing project. The Story of QPR revolves around the communities in and around Loftus Road and is going to be delivered by young people in the community. This resonates with the vision behind CrowdBnk, which enables ideas to get off the ground with the support of people who feel passionately about them. This is an excellent example of the social and financial impact crowdfunding can have”