Coming from the pages of Campaigns and Elections is a report regarding Rally.org and their initiative to migrate their political fund raising platform and migrate to a crowdfunding venture.  During the 2012 election cycle, the Rally application was utilized by the national campaigns for Mitt Romney as well as Elizabeth Warren – then a Senate candidate in Massachusetts.

The San Francisco based company already has 4.6 million registered users from their previous fund raising projects.  Their Beta program is scheduled to launch today in Europe. 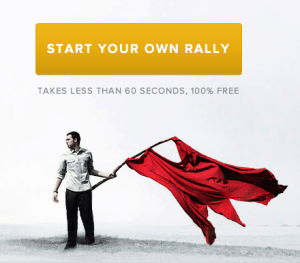 “We certainly want Rally to become a global company,” Serres tells C&E. “Berlin has a rapidly growing creative class. I would’ve come here sooner if I could.”

But it took a year to build a global payment network—one that will process 17 currencies starting with the euro—and acquire the necessary funding. Back in June 2012, the startup raised $7.9 million the new-fashioned way—online via a Series A round of funding.