The news the Bjork has cancelled a Kickstarter campaign to crowdfund the Biophilia app for Windows 8 and Android operating systems is a surprising one if you take it at face value. This is frickin Bjork! She has a huge number of adoring fans. She’s an icon. A superstar. Her output is cerebral, innovative, always interesting and lapped up by millions of people. So why this humiliating failure?

The Kickstarter campaign was established to raise £375,000 in 30 days but raised less than £15,500 after ten, so Bjork pulled the plug. Unlike Amanda Palmer, the off-cited crowdfunding success story, Bjork couldn’t get this project off the ground. Crowdfunding has been presented as the 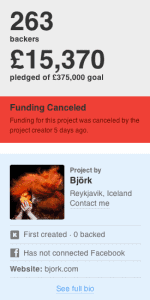 great white hope for independent artists, but it’s also one of the most uncertain ways to get cash. Some artists might assume that you just lash something up on Pledge, Fund It or Kickstarter, and sit back and watch the figures clock up, but that couldn’t be further from the truth.