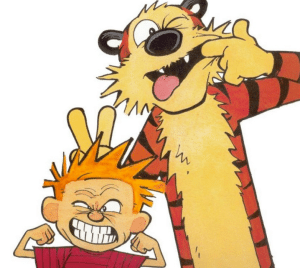 In the age of Twitter and online streaming content, the endurance of a treasured comic strip (from something as archaic as a newspaper) especially among the Facebook generation, might be a bit puzzling and unexpected. It’s also the subject of the new documentary “Dear Mr. Watterson,” which premieres this week at the Cleveland International Festival.

Ask anyone under the age of forty to name their favorite comic strip and they’ll probably reply “Calvin and Hobbes.” The daily cartoon adventures of a precocious six-year-old and his imaginary best friend/stuffed tiger are beloved and cherished to this day. A total of eighteen books, which collected the strips in order, were published and all together still sell about half a million copies every year. The Complete Calvin and Hobbes, a hefty three-volume hardcover set, was released in 2005 and soon became a New York Times bestseller. And the best part? Calvin and Hobbes is nearly thirty years and its creator, Bill Watterson, ceased producing new strips eighteen years ago.