So back in the day I used to do a bit of camping.  Today not so much.  But I have not forgotten the joy -and at times agony – of sleeping in a tent with little more than a sleeping bag between me and the hard earth.  Well this crowdfunding campaign caught my eye and is interesting enough for me to revisit being one with nature and camp again.

The Perfected Hammock – dubbed Nubé is crowdfunding on Kickstarter now.  The campaign sought to raise $30,000.00, but the crowdfunding project has doubled that and then some – with days to spare.

Standing on over $70,000 raised by 283 backers this is clearly a success as campers see the benefit and efficacy of sleeping in a sturdy, well protected hammock as opposed to laying on rock.

So what exactly is the Nubé (pronounced new-bay)?

Well of course there is the part about being elevated, so no cosying up with snakes, scorpions and spiders – definitely a plus.  It also includes;  a No-seeum Insect Shelter; a very sturdy water barrier fabric using 40 denier nylon rip stop with two coats of silicone; and an elevated gear storage which can hold up to 200 lbs.  Hey, if they are no trees around it can double as a tent!

The founders own and operate the manufacturing company so they are controlling the quality from start to finish. They are committed to using only  the best  material available.  The owners have actually incorporated their

company in Managua, Nicaragua as opposed to outsourcing to another company for production.

Started by a self professed gear snob and mechanical engineer, Richard Rhett, the concept germinated on a trip to Honduras back in 2009.  He camped in a hammock every night but realized they they were sub par.

Determined to improve on the concept of “ham mocking”,  when he returned home he purchased a sewing machine and within a brief time founded Sierra Madre Research in 2012.  His company is producing other high quality gear as well – and a portion of his profits go to fund clean water well drilling in 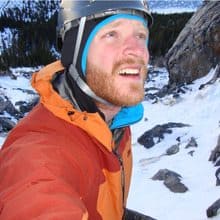 recognition of the amount of illness in the undeveloped world is caused by dirty water.  Rhett is newly married and his wife Julianne is the companies Chief Marketing Officer. Of course they both love the outdoors and adventure.

So if you are the outdoor type you must check this out.  If you are skeptical watch the video as it is worth the 3 1/2 minutes of your time.