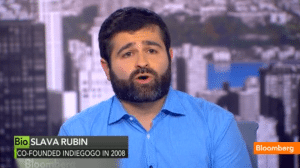 Slava Rubin, Indiegogo Co-Founder and CEO, talks crowdfunding on Bloomberg Surveillance today, specifically he comments on the opportunity with equity crowdfunding. Slava has spoken about Indiegogo’s interest in popular or retail crowdfunding before in the past. This has to do with “Title III” of the JOBS Act where companies may raise up to $1 Million in any given year by soliciting small or un-accredited investors. Note these equity crowdfunding rounds may occur in concert with a private placement which may be unlimited in the size of the raise.

Slava states he wants to disrupt “the gatekeeper who decided who gets money”. Indiegogo is “really excited about equity crowdfunding”.

Indiegogo funded campaigns in 76 countries for #GivingTuesday. Slava uses this as an example how they can scale raising funds by applying technology for crowdfunding.

While they have not made an official announcement, it is becoming more apparent that Indiegogo is on a path to enter into retail crowdfunding once the regulations are finalized at some point in 2014.
_________________________