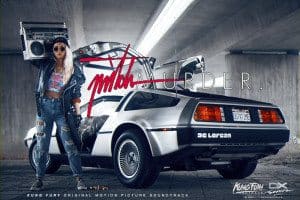 The campaign creators for the campy 80’s style action film Kung Fury must still be in shock as they launched their crowdfunding campaign this past Thursday and rocketed past their $200,000 goal on Friday.  As of today the campaign, which is in their very first stages of crowdfunding, stands at over a quarter million dollars raised from over 6000 backers.  As Crowdfund Insider wrote about this film project yesterday, this may change the way we view crowdfunded films as their is no Spike Lee nor Veronica Mars to capture an existing fan base.  If the film raises a million dollars – and it sure looks like that train is leaving the station – they will look for a distributor for a potential  full length feature film.

The plot is epic.  Written by David Sandberg, the Kung-Fu action film is the story of an 80’s character based in Miami who goes back in time to kill the most dangerous Kung-Fu master of all times:  Adolph Hitler.  This makes Sharknado look like a kids game.

For anyone who grew up watching the iconic films of the 1980’s you will be in camp heaven.  The majority of the film has already been shot for a 30 minute short but with the $1 Million we will probably get a full 2 hours of excitement, action and over the top drama.  All from a small company called Laser Unicorns in Sweden.  What more could we ask for?