Kung Fury is part comedy, part action and – from the looks of the trailer – completely hilarious. The movie is currently crowdfunding on Kickstarter and the film’s creator is seeking $200,000 from the crowd to turn the movie into a feature length film. With almost a month left in the campaign and after just 24 hours on the site, Kung Fury is already more than halfway to its goal.

The pitch video (embedded, below) includes the trailer, and it’s epic… 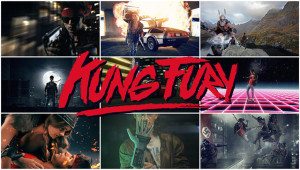 Even though the film is set in locations like 1980’s Miami and 1940’s Germany, the film was shot in Sweden largely in front of green screens. This gives the film a certain look that plays really well in the trailer, but that also means that post-production is going to require a lot of visual effects work. The project aims to fund that process by providing the cash necessary to hire a team of seven visual effects artists to finish the film.

The film’s creators are actually asking the crowd for help in finding talented individuals to help finish the film. Those interested are encouraged to email [email protected] for more information.

If the campaign can hit $1 million in funding, the film will be pitched to a potential distributor and the script will be reworked for a feature-length film. Much of the shorter version of the film has already been shot.

This will be one to watch as we head into 2014, and could set a new precedent when it comes to films on Kickstarter from people not named Zach Braff or Spike Lee. The creators of Kung Fury may not be household names, but they obviously possess some serious skills when it comes to film production, and the subject matter of the film is ridiculous enough (in a good way) to have potential to generate some serious social buzz. It could be a perfect crowdfunding storm. $1 million is not out of the realm of possibility for this flick.