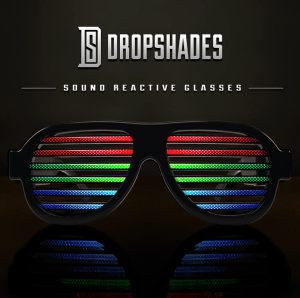 After Successful Kickstarter Crowdfunding Campaign, Audio Responsive Glasses Are Being Delivered to Backers.

DropShades used the crowdfunding platform Kickstarter to raise initial funding to cover the tooling expenses for their audio responsive glasses that cascade an array of LED lights up and down depending on the beat of the music.  Backers were originally expecting their rewards this past August but as with many Kickstarter campaigns delays and production challenges pushed back the expected delivery date.  Many supporters had hoped to have glasses available to ring in the New Year but unfortunately most will need to wait until the next party to don the glasses.

While many backers were sympathetic to the manufacturing challenges, one commenter stated;

Already 4 months behind schedule. New Year’s Eve already and still don’t have my DropShades. I was hoping to wear them to at least 10 party in the past few months. Once I get them in January, I won’t have any immediate need for them as I don’t have any major parties coming up. *sigh* I’m pretty disappointed at this point.

After seven months of prototyping, perfecting the design, and manufacturing, DropShades is finally ready to share their product with the world.  The glasses are manufactured in the USA by a California company. 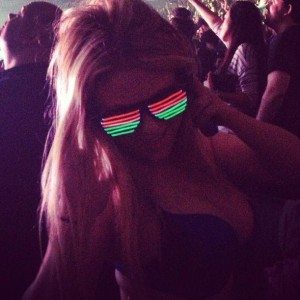 “We are incredibly excited to announce that we have started manufacturing and will be shipping our first pairs of DropShades today,” said co-founder Skylar Perkins.

“We knew there would be demand for our idea, but never expected the results we got from our campaign,” said co-founder Harrison Herndon. DropShades originally set out to raise $15,000 on Kickstarter. “We surpassed that goal in just 6 days,” said Herndon. DropShades ended the month with 1,813 backers from around the world pitching in a total of $78,128 to get the company moving.

Currently all manufactured pairs of DropShades rolling off the line are going to Kickstarter backers and those that reserved a pair on the DropShades website. “We’re shipping out every pair that is made, every day,” said Perkins. “We’re getting pretty good at folding boxes,”.