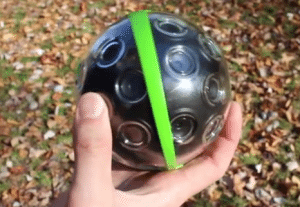 Indiegogo has been on a roll lately. The Geek Pulse just closed at over $1.1 million, and it seems a campaign in its last week on the platform is set to eclipse that total. The campaign aims to fund the Panono, and it’s an innovative (and interactive) panoramic camera.

When Gizmodo got their hands on the prototype they loved it. Now that they’ve had a chance to play with the “real deal,” they love it even more. Every crowdfunding campaign doesn’t have the ability to send production-ready versions of their hardware to the press, so this is not only a cool opportunity to see what the device is like ahead of time. It’s a confidence-inspiring account of what backers can hope for when they receive their Panono.

So what is it? It is a panoramic camera, but it claims to be a lot more than that, too. The total resolution of the device is 108 megapixels. The device’s manufacturers claim it is the “first consumer camera with more than 100MP.” So there’s that.

The Panono is a tossable camera. The user throws the ball of lenses into the air and the Panono senses the top of the throw and snaps a panoramic photo at precisely the right moment.

For now, you’ll just have to content yourself with downloading the Panono app for Android or iOS and drooling over the pre-loaded sample shots meant to give you a taste. But do so at your own risk—because trust us, once you get a feel for what the Panono has to offer, you’re going to be hooked.Gizmodo

So what does a panoramic photo from the Panono look like? Take a look below…

In a word, amazing.

Now, the Panono doesn’t come cheap. It’s available starting for $499 during the Indiegogo campaign, which is set to run through January 11. That hasn’t stopped over 2,000 people from chipping into the campaign to secure discounted units ahead of mass market release. One backer has even ponied up $9,999 to use the prototype at an event of their choosing.

This campaign will climb Indiegogo’s all-time most funded ranks for the next week or so, so we’ll be watching to see how high it goes.