Crowdfunding is certainly used for a variety of endeavors and reasons, some of them quite strange. This one is right up there.

We reported on the launch of a campaign to fund a monument to Satan about a month ago. Less than 30 days later that campaign is now fully-funded, having raised over a stated $20,000 goal. Furthermore, an artist’s rendering of the proposed statue has been released. 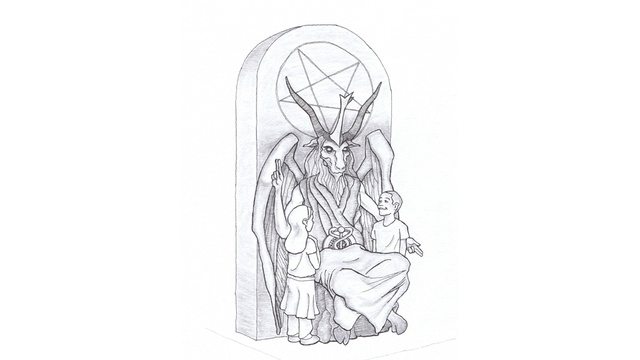 The goal is to put this statue on the steps of the Oklahoma State Capitol. A spokesperson for the New York-based Satanic church released a statement that outlines the goal of the statue. In short, it seems they believe there’s a point to be made in light of a Ten Commandments monument that was erected on the steps last year…

By accepting our offer, the good people of Oklahoma City will have the opportunity to show that they espouse the basic freedoms spelled out in the Constitution. We imagine that the ACLU will also embrace such a response. Allowing us to donate a monument would show that the Oklahoma City Council does not discriminate, and both the religious and non-religious should be happy with such an outcome. Our mission is to bring people together by finding common sentiments that create solutions that everyone can appreciate and enjoy.

The ACLU is currently challenging the installation of the Ten Commandments monument, and a moratorium has been placed on any further monuments until that case is settled.

Indiegogo, the State of Oklahoma and religion have combined to produce not one but two controversial campaigns as of late. Comedian Doug Stanhope recently raised over $125,000 for a woman and tornado survivor who said she was an atheist to Wolf Blitzer live on CNN. One of the most popular rewards during that campaign? A “Get out of Hell free” card.

The currently-running, Satanically-themed crowdfunding campaign on Indiegogo ends in ten days. The controversy surrounding it could go on much longer.