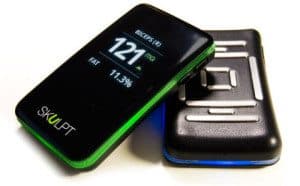 After receiving some stellar recognition at CES by winning the Last Gadget Standing competition and being an Awards Honoree for Innovations and Design.  Skulpt Aim ended their Indiegogo crowdfunding round by raising $384,509 – almost four times their stated goal.  This amount raised places Skulpt in the top twenty successfully funded technology campaigns on Indiegogo. 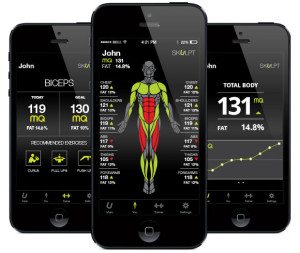 Skulpt Aim uses technology to measure muscle fitness – not just body fat percentages.  The device uses  Electrical Impedance Myography (EIM), by applying a small current to the area you are measuring and analyzes the flow of the current.  The flow is different for muscle vs. fat so a measurement is generated called Muscle Quality (MQ). EIM has actually been utilized in hospitals, NASA and  elsewhere for quite some time. Skulpt is looking to popularize the technology for fitness types everywhere.

Over 2700 backers supported the pretail campaign with the vast majority contributing for a reward which delivers a device.  The product is now available for pre-order on the Skulpt web site for $149.  Early backers may expect the delivery of their Skulpt Aim in March 2014.

The small Florida based company was founded by Jose Bohorquez and Seward Rutkove.  Bohorquez has his Phd in Electrical Engineering from MIT and previously worked for GE Healthcare.  Rutkove, a Harvard Professor, is Chief of the Division of Neuromuscular Disease at Beth Israel Deaconess Medical Center.  He is also a winner of the Prize4Live $1 million ALS Biomarker prize.