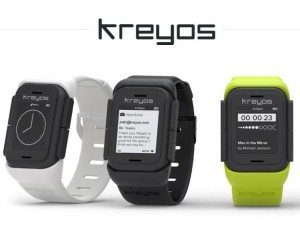 In a recent update from the project creators, Kreyos Smartwatch teased along backers as they “inched closer” to shipping the backer rewards.

The original delivery date for the Kreyos was scheduled for November 2013.  The watch has been delayed several times already as the creators work to rectify and issues which had the potential to impair the functionality of the watch that promises to incorporate voice and gesture control.

Kreyos is 3rd most successfully funded project ever on the Indiegogo platform having raised over $1.5 million from 11,722 supporters.

Some backers have requested refunds as time (and technology) has forged ahead, while others have waited patiently to receive their promised smartwatch.

As we inch closer to getting ready to ship all orders, we want to take extra measures to ensure that you receive your orders as soon as possible.

You guys have stuck with us through the entire project, and since we know that you’ve been waiting for the Meteor to ship for quite some time now, it’s inevitable that you might have changed residences. Or, for whatever reason, you are no longer able to receive packages from the shipping address you previously  specified..

At least one of the challenges with the watch was the microphone and speaker configuration that created an echoing issue.  Identified and apparently resolved, the hurdle pushed the ship date back to April 2014.

The Kreyos team has been providing regular updates – and delays are the norm for rewards based campaigns (at least today).  Many supporters will be happy to receive their delayed, but functioning, Kreyos Meteor this coming April.