Teaching the first class ever on social media analytics, Marquette University instructor Tim Cigelske and his students conducted seven different crowdfunding campaigns to get a closer look at the fundraising phenomenon. According to the class, the campaigns raised a total of $20,000 to support some of the school’s technology and education initiatives.

“Analytics and big data mean nothing if you don’t have a clear mission and something you want to accomplish,” Mr. Cigelske explained. “I wanted to create a project where they could make analytics applicable”

The class of 22 split in teams to create the campaigns and launched them in early April. The missions ranged from covering on-campus housing for a South African student to help a psychology department for autistic teens. The campaigns also helped raised funds for an engineering lab experimental robot that will help children fight obesity and learn to read. 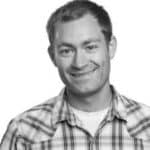 Mr. Cigelske noted in order to create and organized the campaigns; the students used social media analytical tools such as Klout to develop the strategies, identify the audience and connect with others who have a strong social media presence. The analytics helped determine what is and is not working, which in return allowed the teams to measure results when the campaigns ended.

By Wednesday’s deadline, three of the campaigns reached their funding goals. 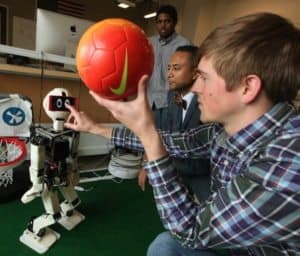 The campaigns for housing were posted on Indiegogo. According to Indiegogo’s cause director Breanna DiGiammarino, the class was one of the first university classes where students are taught how to run a crowdfunding campaign. “The students all did a very good job of preparing, learning about practices and studying what works.”

The robot campaign exceeded its $5,000 goal, and had addition money that will be used for a second robot. The robots will be sent to students in Brazil this job for the RoboCup: The Robot World Cup Soccer Games and Conferences. Project leader and engineering professor Andrew B. Williams revealed, “The Marquette team is the only one from the U.S. to qualify for the teen-size robot event, where the robots are programmed to play two-on-two soccer games and remote controls are not allowed. We’re definitely believers in crowdfunding for research projects after this.”