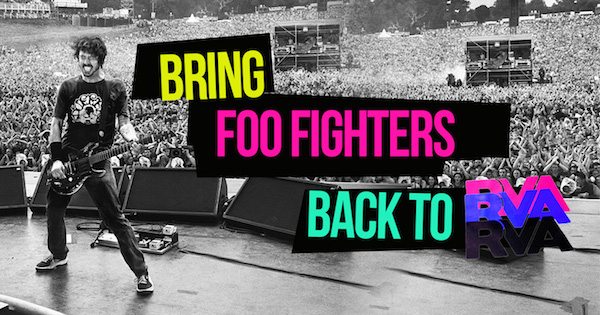 Ready to rock their devoted fans in Richmond, Virgina, Foo Fighters announced they are making their way to the city all thanks to a crowdfunding campaign on Crowdtilt. Freelance creative director and copywriter Andrew Goldin launched the campaign in March with a goal of $70,000.

According to Rolling Stone, the funds were going towards bringing Foo Fighters back to Richmond for their first show since 1998. Mr. Goldin along with fellow organizers Brig White, John McAdorey and Lucas Krost, decided to sell 1,400 tickets at $50 a piece in order to convince the band to return. Two local businesses, Brown’s Volkswagon and Sugar Shack Donuts, each donated $5,000 to the campaign and plan to give away all their tickets.

In a mission statement, Mr. Goldin wrote, “Rather than waiting, and waiting and waiting for our favorite band to come to us, we’re making it happen. We’re selling [tickets] to a Foo Fighters that the band doesn’t have scheduled yet in the hopes that they’ll come to our great city and play a show. Then if the band comes, we all rock out. If they don’t come, everyone gets their money back. Every cent. So buy your [tickets], spread the word, and let’s make some rock-n-roll history.”

After noticing the campaign’s success the band took to their Twitter account on Saturday to voice their excitement about the upcoming show.

Although the venue and date has yet to be determined, Richmond fans jumped at the opportunity and raised $70,026.