Speaker Sponsor has become known as an online matchmaker between speakers and the small businesses that want to sponsor them. But now they’ve added a new service, crowdfunding for speakers. 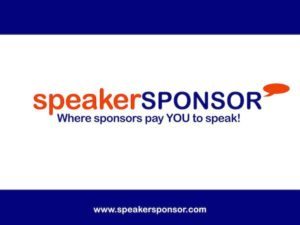 “I heard so many people say they’d love to spread the word about a particular cause, but that they weren’t speakers themselves,” Speaker Sponsor CEO, Julie Austin explains. “So, I thought, why not have crowd-funding for speakers, so their voices could be heard, and cause speakers could get paid.” Speaker Sponsor cause speakers have topics such as domestic violence, animal rights, and homelessness.

Crowdfunding for speakers at Speaker Sponsor is different from Kickstarter, which is about particular projects that have a deadline, and a limit that has to be met. On Speaker Sponsor, a cause speaker is given as much time as they want to get out and speak on their cause, but the longer they wait, the fewer donations they will likely get. Speakers who are the most active will get the most traffic. And that means keeping their fans up to date on what they’re doing and where they’re speaking. Usually a popular speaker is one who has a good story to back up their cause.

Justina Page and her son Benjamin were badly burned in a house fire, which also took the life of her son Amos. Now she travels around the country speaking about fire safety and prevention. Anyone who is passionate about that cause can donate to Justina through her Speaker Sponsor page, so she can go out and spread the word about fire safety.

Best selling author and speaker Michael Solomon is spreading the message about philanthropy itself. To quote Michael, “When you give, don’t give until it hurts, give until it feels good.”

Speaker Sponsor continues to be the leader in sponsorship for speakers, creating opportunities for speakers, and marketing partnerships for the small business community.