Readers may recognize hearo.fm’s name from its two showcases and 40+ bands who played at this year’s SXSW.  Breaking into the music 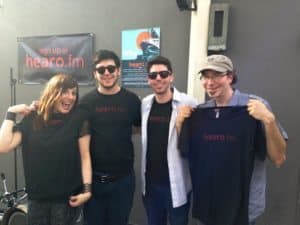 5.9 Billion in annual revenue, hearo.fm has grown into a global music marketplace aiming to claim the indie artist segment of a realm dominated by iTunes and Spotify.  The startup not only boasts over 4,000 indie artists on its platform and over 56K twitter followers, but the angel-backed support of Andy Hertzfeld, co-creator of the Macintosh.  Currently equity crowdfunding on SeedInvest, hearo.fm seeks to raise $1,000,000  with a minimum investment of $5,000.

The pitch: “hearo.fm is a global music marketplace that enables independent artists around the world to showcase and sell their music and content directly to fans. There is a huge untapped market of millions of artists around the world with quality unlicensed music. The licensing structure of the industry is far too complex which creates a barrier to entry for most artists and musicians.  hearo.fm’s proprietary architecture enables artists to stream and sell their music under a non-exclusive hybrid license.”

While at Brown, several of the hearo.fm team met as musicians networking and collaborating with other local musicians.  As Co-Founder

The future product: “The impending launch of our main music discovery platform which we call Hearo One. H1 dramatically simplifies our interface to 1 super-functional and engaging page which combines music discovery, streaming and buying directly from an artist’s social store. Hearo One is geared to change the face of music for independent artists around the world, and we are more excited than ever to bring this product to light.”

hearo.fm highlights its differences from other music services on its website’s FAQs: