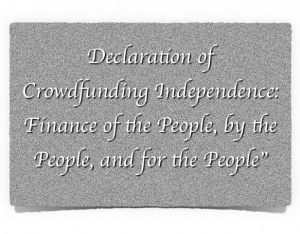 During Global Entrepreneurship Week, the Competitive Enterprise Institute (CEI) released a new report on how regulation threatens entrepreneurs and their abilities to start businesses, create jobs, and bring new products to market.

The report, titled “Declaration of Crowdfunding Independence: Finance of the People, by the People, and for the People“, also includes historical examples of crowdfunding, like how Henry Ford financed the first affordable American automobile, which would likely not be possible in today’s regulatory environment.

“Crowdfunding essentially involves raising money from a crowd of ordinary people for both charitable and entrepreneurial ventures without going through a ‘middleman,’ like a major stock exchange or financial institution. Yet even though we live in the age of the app, such capital is being stalled by rules and regulations passed before most homes had telephones,” explains CEI senior fellow and author of the report John Berlau. “As a result, crowdfunding’s potential to create jobs and increase income mobility is being held back as entrepreneurs struggle with mounds of red tape from old securities laws.”

Key points of the published report include: