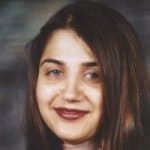 Nin Ventures launched its new investment crowdfunding platform early last year. The objective of the site was described as transforming the VC industry by creating an online marketplace for accredited investors leveraging Title II of the JOBS Act.  Chicago based Nin went on to launch its own crowdfunding round on Crowdfunder for its “next generation tech fund“.  Nin Ventures was created by Harvard Business School graduate Nin Desai.  She said at the time that “historically, venture capital was the domain of the wealthy and a handful of institutions who could afford to invest $5 million+ in a venture fund. NIN Ventures’ goal is to make venture capital an asset class for everyone. NIN.VC is a unique web based opportunity for ‘accredited investors’ to invest in a venture capital fund with a minimum amount of $100,000.”

Desai commented on the new feature;

“By offering multiple alternatives, we are committed to making it easier for our investors to tap into venture capital. There are many vendors that accept Bitcoin and various places where Bitcoin owners can spend but NIN Ventures is a unique opportunity for them to invest.”

“NIN Ventures is a trailblazer in its field and our aim at SNAPCARD is to make it easier for owners to use digital currencies, so the partnership just made sense. We believe Bitcoin can add great value to the investing process. Opening up new doors and industries for consumers to use Bitcoin is something we focus on, so we’re excited to bring this to the community.” 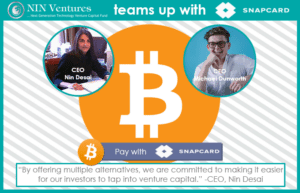 NIN Ventures states it is the first of its kind technology venture capital fund to be raised via internet. NIN Ventures will invest in financial services technology, education software, internet and digital media, mobile communication, cloud computing, 3-D printing, and other path-breaking technology companies in the United States.