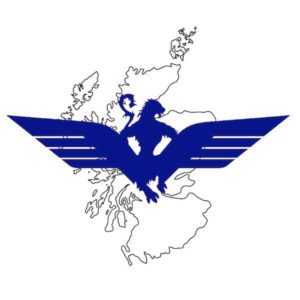 “Well, it’s that time of year again, readers. After last year’s heartbreaking defeat in the independence referendum we weren’t sure if Wings Over Scotland would continue, but the Yes movement bounced back so quickly and so spectacularly that frankly it seemed irresponsible to quit. That does mean, though, that we’re going to have to rattle the collecting tin again.

“In many ways, this is a moment of truth for crowd-funded Scottish political journalism. With no referendum on the immediate horizon (at least, not one on Scottish independence), now is when we get to find out if people are still prepared to put their hands in their pockets for an alternative to the mainstream media.

“Last year’s fundraiser was successful beyond our wildest dreams. Having asked for a hugely ambitious £53,000 – the highest figure any Scottish politics site had ever sought – we were gobsmacked to smash the target in less than nine hours, and to go on to almost double it. 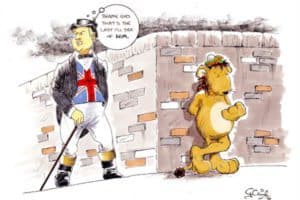 “We did our best to put the money to good use. We upgraded the site’s server to cope with a huge increase in traffic – in the 12 months before last year’s fundraiser we had 19.6 million pageviews, whereas in the 12 months from then until now we’ve had 55.9 million – and we posted more articles in the year up to the referendum than ever before, with 1,257 compared to 1,054 the previous year.

“We spent thousands of pounds on advertising that helped see the site visited by the astounding figure of almost 3 million Scots in 12 months (over three times as many as the previous year), we commissioned a whole series of opinion polls, printed countless thousands of leaflets and posters for the referendum, and above all else we produced, promoted and distributed the Wee Blue Book. 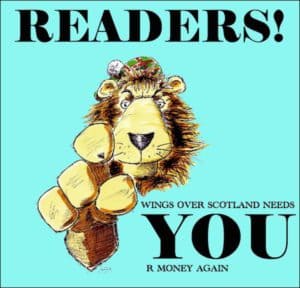 “At 72 pages it was twice as big as we originally planned, and we distributed around 300,000 print copies to every corner of Scotland – more than three times as many as the Scottish Government’s White Paper – with another 800,000+ copies of the electronic version downloaded. In all we spent over £70,000 on it.

So we hope readers feel they got value for their donations, and that you’ll feel able to trust us with your hard-earned money again.”

Since its launch this morning, the Wings of Scotland’s project quickly raised its initial £60,000 from over 1,500 backers. It is set to close on March 29th.