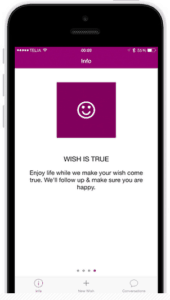 Djenee, a new company that has developed a “personal on-demand digital concierge service”, raised almost S$500,000 on the first day of equity crowdfunding on FundedByMe according to a company statement.  The platform called this funding round a “new standard for equity crowdfunding in Asia”. Djenee (pronounced like Genie) is said to be basing operations in Singapore. The funding round remains open on FundedByMe.

FundedByMe, based in Sweden, has announced its intention to use Singapore as its Asian hub.  The portal will then expand its service into surrounding countries, with localized teams and native languages. FundedByMe recently received approval to operate in Malaysia and was one of only 6 platforms receiving official approval to provide investment crowdfunding.  FundedByMe recently formed a partnership in Singapore by teaming up with CoAssets and New Union to create a regional alliance.

FundedByMe co-founder and CEO Daniel Daboczy commented on the successful raise for Djenee;

“We’re extremely excited about partnering with Djenee to raise their very first round of funding, which broke records for Asia and with investors from all around the world. This is a start for crowdfunding in Asia and we expect South-East Asia to exceed US $1 billion as a market by itself in the next few years. FundedByMe will give companies a global stage for companies in Asia to find investors, so that these companies accelerate and build powerful momentum from day one.”

Djenee drew a comparison to “Magic”, a similar service based in the US, which recently raised money at a US $40million valuation just after six months of operations.

“People have busy lives, and are desperately trying to simplify. Tech hasn’t done much to solve that problem. There are a million apps out there and we’re still as busy as ever. This is why we built Djenee. You simply ask Djenee, and it gets done,” said Co-Founder and CEO Pär Helgosson. “We think we’re onto something huge, and the response to our campaign is a sure sign that agree with us.”

Helgosson and his team were previously from The Service Corporation, specialising in providing sourcing and support services to high-growth companies. With decades of experience, the team is focusing its energies and expertise on making Djenee the next phenomenon in service delivery.