MYBank, a new online only bank, is poised to challenge China’s state owned banks with its 100% digital, branchless banking operation that will serve customers 24 hours a day. This is one of China’s first privately owned internet banks as China pushes forward in the disruption of traditional banking. Estimates place Chinese savings deposits at an incredible $7.8 trillion.

China’s government has been in a bit of a quandary as it desperately needs to encourage economic growth by providing access to capital and financial services to small and emerging companies. The state owned banking system falls short in this goal. Therefore policy makers have encouraged competition in the financial industry thus incentivizing entrepreneurs to modernize the financial sector. Consumers have quickly migrated to mobile financial services. Banking is an industry in desperate need of change. The internet now allows for a low friction, low cost service that has traditionally been provided by brick and mortar branches housing rows of tellers.

“Answering to the needs of those who have limited access to financial services in China is our mission. MYbank is here to give affordable loans for small and micro enterprises, and we are here to provide banking services, not for the rich, but for the little guys.”

MYbank is said to “be a player in the Alibaba Group‘s e-commerce ecosystem which offers potential synergies unavailable to other private banks. Ant Financial created one of the world’s largest money market funds and launched China’s first credit agency based on online and offline data.”

Ant Financial’s micro-lending subsidiary—Ant Micro Loan— is said to have provided over RMB 400 billion ($64.4 billion) in loans to more than 1.6 million small businesses since 2010.  According to MYbank Governor Yu Shengfa, the internet bank will use big data to beat the existing banking industry at its own game. “We evaluate the credit history of smaller enterprises and determine the lending risks. This is how we ease the borrowing strain on smaller enterprises as we don’t only evaluate them on collateral.”

MYbank will focus on the underserved rural market but notes this sector is “too large to service alone”.  MYbank is interested in forming partnerships with other lenders. 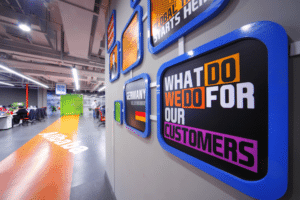 MYbank is viewed as one of the pillars of Ant Financial’s strategy as defined by Alibaba: