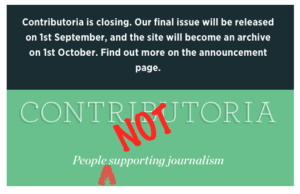 Contributoria, a site designed to crowdfund journalism projects, is shutting down. According to the front page of the site the final issue will be on September 1st and the site will become an archive beginning October 1st.

Contributoria was a venture of the Guardian Group and announced during early 2014. Contributoria won a “News Innovation Contest” at one point – something that was sponsored by Google.

According to a report in All Digitocracy the demise was not unexpected;

Julie Schwietert Collazo, who published five long-form stories thanks to Contributoria, said she was not surprised by today’s announcement.

“Contributors’ staff had a pattern of not addressing concerns of writers and were not transparent in their management,” she said.

Crowdfunding journalism has experienced a rather checkered path.  Getting backers to support independent reporting has been difficult at best. IndieVoices, launched in December 2013, announced their intention to pivot. That was several months back with no “Pivot” in site. Spot.Us died an ignominious death this past Spring. Meanwhile vibrant journalism endeavors such as BusinessInsider, BuzzFeed and Reddit continue to thrive.