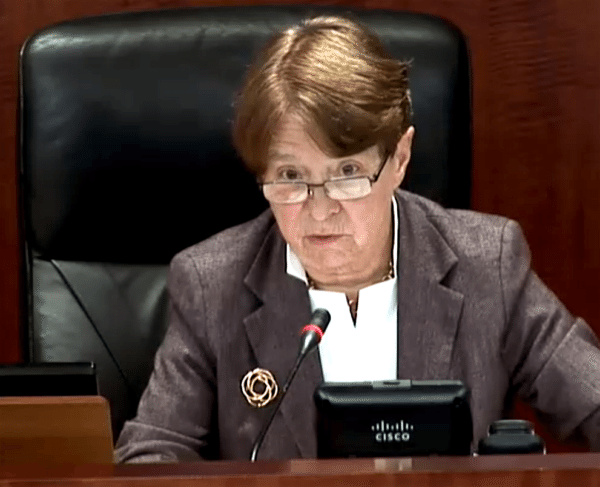 Securities and Exchange Commission Chair Mary Jo White opened up the meeting on Title III crowdfunding and rules impacting intrastate crowdfunding today with an explanatory statement on the agencies rule making process.  The much-anticipated announcement incorporated several changes  which will be well received by the nascent crowdfunding industry including the removal of audited statements the allowance of crowdfunding portals to curate companies raising capital on their sites.

The final rules were not without dissent and concern from other Commissioners.

Chair White’s statement is republished below.

Good morning.  This is an open meeting of the U.S. Securities and Exchange Commission on October 30, 2015, under the Government in the Sunshine Act.

Today, the Commission will consider two staff recommendations for rules intended to increase companies’ access to capital within a strong framework of investor protections.  The first is a recommendation to adopt congressionally mandated rules under the JOBS Act that would permit startups and small businesses to raise capital by offering and selling securities through crowdfunding, the last of our significant rulemakings under the JOBS Act.

The second is a recommendation to propose changes to Securities Act Rule 147 for intrastate offerings and Rule 504 of Regulation D to further facilitate the ability of smaller companies to raise more capital under a set of important state and federal investor protections.

The staff will present both of their recommendations, followed by comments from the Commissioners on both releases. We will then take separate votes on the two releases at the end of the meeting.

First, we will consider recommendations on crowdfunding.  Crowdfunding is an evolving method of raising money using the internet, which to date has generally not involved the offer of a share in any financial returns or profits from business activities.  Doing so currently triggers the application of the full suite of federal securities laws, both for the issuers making the offerings and the brokers who intermediate them.

The JOBS Act and the final rules recommended today would allow securities-based crowdfunding offerings to take place within a regulatory framework established by statute and tailored to the dynamics of this internet-based method of raising capital.  The JOBS Act sets forth detailed requirements for our rules, with many intended to help protect investors seeking to invest in companies through crowdfunding.

This rulemaking has generated tremendous interest from potential issuers, investors, and intermediaries.  The more than 480 comment letters we received raised a number of important issues, focused on the best ways to protect investors while ensuring that securities-based crowdfunding is a workable path for raising capital by smaller companies.  And, as the staff will describe, their recommendations seek to address those comments in the optimal manner for discharging our tripartite mission to protect investors, maintain market integrity, and promote capital formation while carrying out the JOBS Act statutory requirements.

This careful process has involved revisiting some parts of the proposal to ensure that there are adequate measures in place to facilitate capital raising by an issuer population that we expect to be quite different from our other ones.  For example, the staff’s recommendations for final rules include an exemption from the audit requirement for first-time crowdfunding issuers, which is intended to address concerns about the costs of requiring an audit for small, first-time issuers.  Issuers conducting smaller offerings would not be required to file tax returns, as proposed, but rather would be required to disclose specific information from the returns, which should address privacy concerns raised by commenters.  And, as another example, the new rules would provide an optional Q&A format that issuers could use to provide the required disclosure.

There has also been a full reevaluation of the investor protections provided in the proposal, and those have been tightened where necessary.   The recommendation, for example, includes stricter investment limitations intended to reduce the impact of a potential loss for investors, as well as additional restrictions designed to address an intermediary’s potential conflicts of interest.  The recommendation also provides funding portals with more flexibility in determining which offerings to allow on their platform, making it easier for them to bar potentially fraudulent offerings.

As I noted when the Commission proposed the crowdfunding rules, an inter-divisional staff working group will begin immediately to keep a watchful eye on how this market develops and will evaluate the types of issuers using the new crowdfunding exemption, how issuers and intermediaries are complying with the rule, and whether the exemption is promoting capital formation and effectively protecting investors.  As I said in remarks earlier this week, these “out-of-the-gates” inter-divisional working groups are designed to make us smarter and quicker in assessing these new markets, detecting fraud, and making any necessary regulatory adjustments.  After studying the impact of the regulation on capital formation and investor protection, the staff will also submit a report to the Commission no later than three years after the effective date of the rules.

It will be particularly important to understand how this exemption is working with the other changes created by the JOBS Act, both with respect to issuer behavior and the development of any secondary markets.  Among other measures for addressing secondary markets, I am requesting that OCIE, as part of its risk-based exam selection process, continue to review broker-dealer compliance with our rules for quoting unregistered securities under Rule 15c2-11.  And I look forward to continued reports from DERA on how these markets are evolving and being used by issuers and investors.

Our second agenda item is a recommendation from the Division of Corporation Finance to propose amendments to Securities Act Rule 147 and Rule 504 of Regulation D.

The Commission adopted Rule 147 in 1974 as a safe harbor to a statutory exemption for intrastate securities offerings dating to 1933.  Many observers have raised concerns that the current requirements of Rule 147 have not kept up with changes in the business environment and technology, which limits the usefulness of the exemption for capital-raising, especially for smaller state and local businesses.

The recommended proposal accordingly seeks to modernize Rule 147 by establishing a new exemption to facilitate capital formation through intrastate offerings.  The recommended rule proposal would retain the key feature of existing Rule 147 – its intrastate character, which permits companies to raise money from investors within their state without concurrently registering the offers and sales at the federal level.

In recognition of the transformative nature of the internet and other technologies, the rule would, among other things, eliminate the existing intrastate restriction on offers, but – critically for the state‑based nature of the offering and its regulation – continue to require that sales be made only to residents of the state or territory of the issuer’s principal place of business.  The proposal would also ease some of the issuer eligibility requirements to make the rule available to a greater number of businesses seeking financing in state, but ensure that such financing can only occur with a set of baseline investor protections and that issuers have a strong and identifiable presence within the state of offering.  While the proposed rule could be used for any intrastate offering meeting its conditions, I note that more than 25 states have enacted some form of intrastate crowdfunding, and this provision could facilitate capital raising through those state provisions.

The proposal also would amend Rule 504 of Regulation D to increase the aggregate amount of securities that may be offered and sold in any 12-month period from $1 million to $5 million and to disqualify certain bad actors from participation in such offerings.  The proposed increase to the aggregate amount of securities may increase the flexibility that state securities regulators have to implement coordinated review programs to facilitate regional offerings.  The proposed bad actor disqualification provisions would provide consistency across Regulation D and additional investor protection.

I look forward to having public input on all aspects of this proposal.  I am particularly interested in commenters’ views on:

Before turning it over to Keith Higgins, the Director of the Division of Corporation Finance, and Steve Luparello, the Director of the Division of Trading and Markets, to discuss the recommendations for final rules for crowdfunding, I would like to thank the staff that has worked tirelessly on completing this extraordinarily complex rulemaking.  This has been a truly agency-wide effort, and I want to commend the staff for all of their exceptional and extensive work in crafting a final rule that is faithful to the terms and objectives of the statute, strives to be workable for issuers, and delivers a strong set of investor protections.  I also want to commend the staff that developed the rule proposal on Rule 147 and Rule 504 for their insightful and extensive work in preparing a proposal that takes into consideration how to best modernize our rules to promote capital formation throughout the United States, while maintaining strong investor protections.  It is an excellent demonstration of your creativity and dedication as we move beyond the JOBS Act.

The list of those to thank is long and inter-divisional, reflecting both the complexity and importance of the rules which will provide issuers and the public with a new offering regime under the federal securities laws.

I also would like to thank my fellow Commissioners and their counsels for their hard and productive work on these rules.

Now, I will turn the meeting over to Keith Higgins to provide an explanation of the staff’s recommendations on crowdfunding.