CrowdRise Calls All U.S. Nonprofits to Participate in Holiday Challenge offering $250,000 In Prize Money to Organizations that Fundraise the Most During Holiday Season

CrowdRise, the crowdfunding platform for good, announced on Wednesday its second annual Giving Tower campaign for #GivingTuesday, on December 1, 2015.

The Giving Tower, a turnkey solution for nonprofit organizations, is a visual reflection of the combined philanthropic impact on #GivingTuesday. To donate, participants can easily select an organization, make a donation and watch the Giving Tower grow within a virtual city where it will be sized up against some of the world’s largest and most iconic structures.

Rather than spending time crafting their campaigns, nonprofits can quickly create their microsites within the Giving Tower campaign and rally their communities on #GivingTuesday.  As donations are made, donors, organizations and everyone else can watch the tower grow brick by brick via a free virtual reality (VR) app available in the iTunes store and Google Play starting Nov. 24. As the Tower grows, the app will take users through a series of incredible VR video experiences from RYOT, the leader in virtual reality content for social causes.

Last year, CrowdRise’s Giving Tower grew to a whopping 2,514 feet—just 208 feet shorter than the Burj Khalifa, the tallest building in the world and raised $2.1 million over #GivingTuesday alone. This year, organizers say they want to build it to the moon. And, as an added incentive, the charity that raises the most in the CrowdRise Giving Tower on #GivingTuesday from 12:00 a.m. ET through 11:59:59 p.m. ET on December 1st will get a $25,000 donation to their cause. 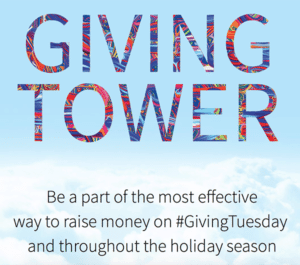 Hundreds of organizations have already joined the CrowdRise Giving Tower Holiday Challenge.  Founding partners include the American Red Cross, the Human Rights Campaign, March of Dimes, Easter Seals, Boys and Girls Clubs of America, The USO, The American Diabetes Association, and Feed the Children. United Airlines will return as a partner for the second year and is offering a MileagePlus bonus award mile offer to any MileagePlus member who donates at least $50.  United is offering up to 10 million bonus miles for the campaign. Mashable has joined the campaign as a media partner.

The Giving Tower campaign will kick off CrowdRise’s annual Holiday Challenge—a friendly fundraising competition between charities that runs through Jan. 7, 2016. $250,000 in grand and weekly prizes will keep charity organizations’ communities engaged and excited throughout the duration of the Challenge. Last year’s campaign raised more than $4 million dollars for participating organizations, with the first place winner, David Sheldrick Wildlife Trust raising over $365,000 and Cure JM Foundation, who took second place, raising over $300,000. Respectively, they took home an additional $100,000 and $50,000 grand prize from CrowdRise.

“The Giving Tower Holiday Challenge raised $4.1 million last year for so many amazing causes. This year, we’re making the campaign way bigger and embracing the coolest, most innovative technology the charity space has ever seen. Our goal is to make it easy for any organization to leverage our technology and create the most unique creative campaign.”

To further help charities get their holiday giving campaigns up and running this year, CrowdRise has developed an all-inclusive toolkit that includes the tools to build successful and engaging Giving Tower and Holiday Challenge campaigns from start to finish to support their causes.