On Tuesday, the CrowdRise Giving Tower for #GivingTuesday raised $3.8 million for over 1,000 charities. The virtual reality Giving Tower, which kicks off the crowdfunding platform’s annual charity Holiday Challenge, grew brick by brick throughout the course of the day, powered by donations, to 4,369 feet, surpassing the Burj Khalifa , making it the tallest building in the world.

CrowdRise data reveals the top five states for charitable giving through its Giving Tower Holiday Challenge on #GivingTuesday 2015 were:

The goal of CrowdRise’s Giving Tower Holiday Challenge was to give charities a compelling and amazing draw to get supporters fired up about giving back—and it worked. Charities leveraged their communities and were able to make a huge impact. 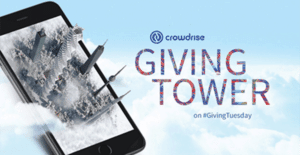 Encinitas, CA-based Cure JM Foundation raised the most money in yesterday’s campaign with over $220,000 and won a $25,000 bonus donation from CrowdRise. Coming in second, Elephant Sanctuary in Tennessee raised over $135,000, followed by Raleigh, NC-based Multiple System Atrophy Coalition with $84,000 and Washington, DC-based More Than Me Foundation with $65,000.