The Angel Capital Association (ACA), a leading professional and trade association for angel investors, announced on Wednesday the three startups that have been selected as finalist for the Luis Villalobos award. This award was named in memory of Luis Villalobos, who angel investors nationwide admired for actively investing in and mentoring ingenious, creative and innovative startups. The finalists are Cognition Therapies, Luxtech, or ViralGains

According to the association, the companies were chosen among thousands of startups nationwide funded by its 13,000+ members, were selected based on their innovation and ingenuity. The winner will be revealed on May 10th at the 2016 ACA Summit in Philadelphia.

“Luis Villalobos finalists are selected as the most ingenious, creative and innovative amongst peer companies, by some of the most active, accredited angel investors in the country, and this speaks volumes to attributes of each finalist.”

“With 41 of the global Fortune 500 brands already customers, ViralGains is rapidly gaining market traction for their unique consumer-centric video distribution platform, allowing brands and agencies to find those consumers most likely to engage with and share a brand’s video content across over 25,000 online publishers, including Facebook, YouTube, and the Open Web.” 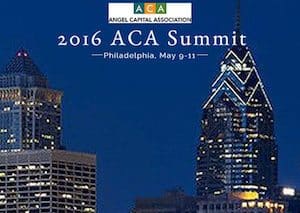 “CogRx has pioneered a way to radically accelerate drug discovery at a fraction of the usual cost and has used this revolutionary process to find a drug with the potential to stop, and possibly reverse Alzheimer’s disease.”

“The company’s patent-pending Direct-AC technology is recognized by major luminaire fixture manufacturers as the leading technology in the industry because it radically reduces costs and component size while maintaining desired lighting industry performance.”

In addition to the Luis Villalobos award, ACA will also announce the Hans Severiens Award, which honors the individual whose work has most advanced the field of angel investing.