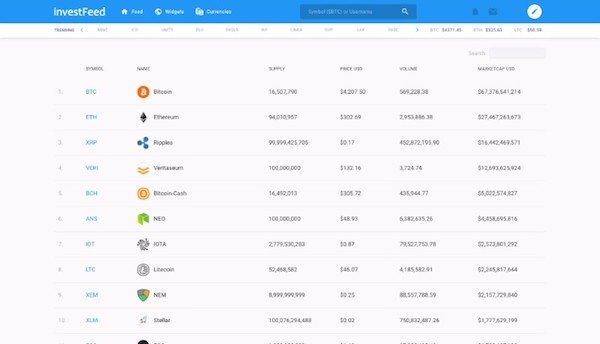 investFeed, the next-generation social investment network that just replaced equities with blockchain based assets, announced on Friday the launch of its new currencies page. This news comes just a few weeks after investFeed completed its Token Generation Event (TGE), which totaled to 15,038 ETH, and the first version of its cryptocurrency-based social investment platform.

As previously reported, investFeed’s platform beta was initially scheduled to be released within 90 days of its TGE closing. It was fast-tracked to give participants and potential users to opportunity to see the “unique” cryptocurrency-based marketplace, along with live tickers and weighted average price charts.  CEO of investFeed, Ron Chernesky said:

“Our development team has been working around the clock to roll out the first version of the platform and it looks beautiful; it’s like Facebook, cryptocurrency and the Bloomberg Terminal met for the very first time. One of our goals was to give mainstream users a simple, aesthetically pleasing UX and remove the technical barriers and complicated language associated with blockchain and cryptocurrency.”

While sharing details about the new currency page, investFeed explained:

“This new coin list allows for any cryptocurrency newcomer to explore the various coins in circulation. Whether your eyes are set on supply, market capitalization, or even volume, investFeed makes it easy to filter and find users that are looking at the same charts.”