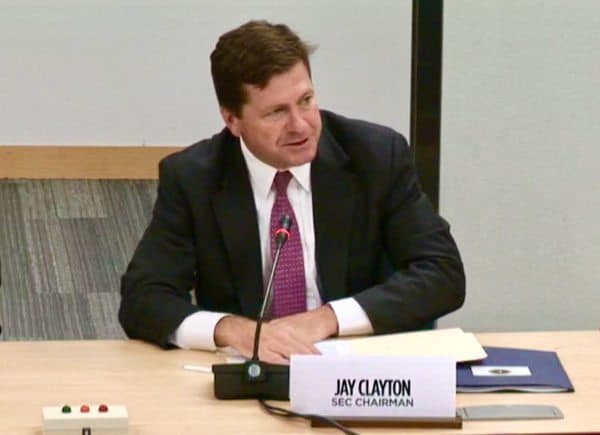 “I am pleased that we have assembled a dedicated, talented, and diverse group with such a wide range of experiences in the public and private sectors. With their help, and the work of the dedicated staff of the Commission, I look forward to continuing the SEC’s strong tradition of interacting with all constituencies we serve effectively and efficiently as we strive to fulfill the SEC’s mission.”

Additional information on Clayton’s staff is available below.

Jeffrey T. Dinwoodie is the lead advisor to the Chairman on matters involving the Division of Trading and Markets, Office of Compliance Inspections and Examinations, Office of Municipal Securities, and Office of Credit Ratings, and assists on enforcement matters. Mr. Dinwoodie previously practiced law at Davis Polk & Wardwell LLP, where he advised banks, broker-dealers, clearinghouses, markets, rating agencies, and other financial institutions on a wide range of regulatory, enforcement, and transactional matters. He has been a frequent writer and speaker on securities and derivatives law topics. Prior to joining Davis Polk, Mr. Dinwoodie served as an SEC attorney from 2008 to 2011 in the Division of Trading and Markets. Mr. Dinwoodie earned his J.D., magna cum laude, from American University and an undergraduate degree from George Mason University.

Raquel Fox is the lead advisor to the Chairman on matters involving the Division of Corporation Finance and Office of International Affairs, and assists on enforcement matters. Ms. Fox joined the SEC in 2011, previously serving as a Senior Special Counsel to the Director of the Division of Corporation Finance and an attorney fellow in the offices of Capital Markets Trends and Rulemaking. Before joining the SEC, Ms. Fox practiced law at Wilmer Cutler Pickering Hale and Dorr LLP, specializing in capital markets transactions, corporate governance, and disclosure. She began her career as a certified public accountant, specializing in taxation. Ms. Fox earned her J.D. from Harvard Law School and a master’s degree in Taxation and an undergraduate degree, summa cum laude, from Baylor University.

Kristina Littman is the lead advisor to the Chairman on matters involving the Division of Enforcement, and assists on other regulatory and policy matters. Ms. Littman joined the SEC in 2010, previously serving as a trial attorney and investigative attorney in the Division of Enforcement and as Counsel to the Director of Enforcement. Prior to joining the SEC, Ms. Littman practiced law at Drinker Biddle & Reath LLP, specializing in white collar and securities litigation. Ms. Littman earned her J.D. and M.B.A. from Rutgers University School of Law – Camden and an undergraduate degree from Florida State University.

Alan Cohen will serve as advisor to the Chairman on emerging risks and regulatory developments, including the impact of Brexit, new European Union regulations (e.g. MiFID II), and issues related to domestic and international clearing and settlement of securities and derivatives transactions. Most recently, Mr. Cohen was an advisor to the executive office at Goldman Sachs after joining the firm in 2004 as the Global Head of Compliance and a member of the management committee, where he supervised a global team that was responsible for compliance across all business and financial products, and in every major international market. Additionally, he was the court-appointed receiver of an SEC- and CFTC-regulated firm that engaged in a global securities and commodities fraud scheme and served on FINRA’s Compliance Advisory Committee and International Advisory Working Group. From 1991 to 2003, Mr. Cohen created and co-headed the white collar and regulatory defense practice at O’Melveny & Myers LLP. Mr. Cohen earned his J.D. from Rutgers School of Law – Newark, a Ph.D. in Political Science from Rutgers University, and an undergraduate degree from Temple University.

Shelby Begany Telle serves as Confidential Assistant to Chairman Clayton. Prior to joining the SEC staff, Ms. Telle spent four years working on Capitol Hill—most recently for the Senate Rules Committee and previously for the Senate Committee on Banking, Housing and Urban Affairs and the Senate Appropriations Committee—all for U.S. Senator Richard Shelby. Ms. Telle earned her undergraduate degree from Vanderbilt University, where she was a Chancellor’s Scholar, and is an evening student at Catholic University’s Columbus School of Law.

Other Members of the Executive Staff

Christopher Hetner
Senior Advisor to the Chair for Cybersecurity Policy