UK-based startup beverage company, NFSG, has successfully secured its initial £150,000 funding target on Crowdcube for its up-and-coming natural energy drink, Overhang. The company achieved the funds with nearly one week until the funding round closed. 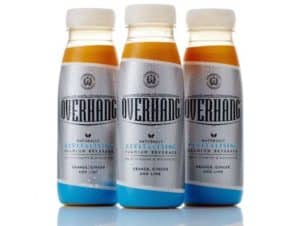 As previously reported, Overhang is described as a natural pick-me-up drink which contains orange, ginger and lime, as well as a blend of vitamins and botanicals, including milk thistle, raspberry leaf, burdock root. Will Wilkinson, Founder and Director of Overhang, recently stated:

“Overhang is based on an old family recipe created by my great great grandfather over 100 years ago. “While the original recipe was designed as an antidote to indulgence, Overhang today is sold and consumed as a natural energy drink, which provides a healthy, energizing and revitalizing boost – qualities that cannot be associated with a number of soft drinks on the market at the moment. Since launching two years ago, the brand has gone from strength to strength and Overhang can now be found on the shelves of over 1000 retail stores including Tesco, Asda, Spar and Holland & Barrett.”

Wilkinson also revealed that while orange, ginger and lime are the predominant flavours, the key to Overhang’s success is the drink’s special blend of vitamins and botanicals:

“With milk thistle for the liver, raspberry leaf and ginger for the stomach and burdock and other antioxidants for the blood, the drink offers a great natural pick-me- up. With only 6g of sugar per 100ml, it is naturally low in sugar and a healthy alternative to the currently widely available energy drinks on the market.”

“We believe there is huge potential for Overhang in the UK and internationally. We have Trademark registrations for Overhang in the EU and the United States and have plans to launch new flavours in the future. But we need investment to tap into its full potential. Our focus over the next 12 months is to continue to expand distribution, drive rate of sale and let the World know about Overhang.”

Funds from the Crowdcube campaign will be used for the following:

The initiative is set to close next Tuesday.