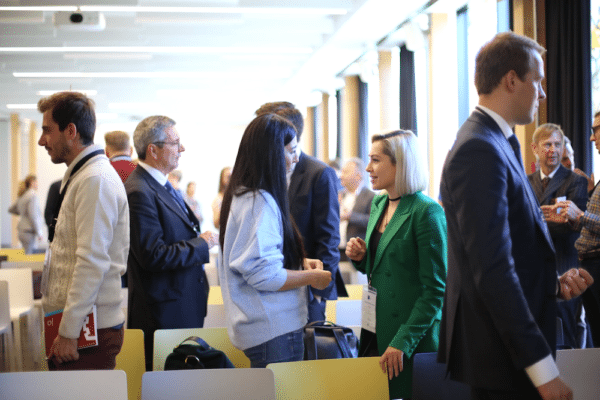 Two main topics of the 6th Annual Convention of the European Crowdfunding Network (ECN) on October 19th and 20th were technology innovation and cross-border finance.

The discussions showed that alternative finance has only scratched the surface of its technological innovation’s potential ‒ the potential to “take the fat out” of financial processes and create more value for customers.

To retain their lead in innovation over banks and traditional finance’s Fintech, startups must keep delivering greater customer orientation and execution efficiency. The success of Initial Coin Offerings (ICOs) is a clear signal, and a red flag, that there exist gaps in technology and cross-border funding that finance has not filled.

Cross-border alternative finance is still hampered by the fragmentation of the European Union (EU) regulation at many levels: Not only do crowdfunding and crowdlending regulation differ from one country to the next, but so do investor taxation and corporate law. Platforms must engage with local and EU regulators. They should not push for more, new regulations, but rather for harmonized interpretations and applications of directives and principles such as the principle of proportionality. Self-regulation, notably transparency and standardization of investor information, is also a priority. 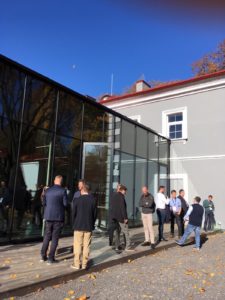 The ECN convention was held in Vilnius, the capital of Lithuania, at the recently opened Sapiegos Tech Park, a compound dedicated to tech startups, VCs, accelerators and incubators. In addition to making networking easier, the off-the-beaten-path location helped participants take a fresh look at alternative finance.

With less than three million inhabitants, Lithuania is the largest of the three Baltic States (Lithuania, Latvia, Estonia) in population and GDP. Often out shined by fellow Estonia which has successfully branded itself as “the digital state,” Lithuania makes tech and Fintech a development priority. This was underlined by the Minister of Finance, Vilius Šapoka and the Director of Financial Markets Policy, Sigitas Mitkus, who both joined and spoke at the event.

The presence of many representatives of platforms from neighboring Northern European countries helped shift the discussions from the usual focus on large EU markets to a more global and more inclusive perspective. As a reminder, Northern European platforms pioneered both new technology and cross-border finance. Founded in 2009, Estonian crowdlending marketplace Bondora, for example, has enabled investors from 40 countries to invest more than €100 million in consumer loans from Finland, Spain and Estonia. Founded in 2012, Finnish crowdinvesting platform Invesdor helped raise more than €38 million euros for companies in Finland, the UK, Sweden, Norway and Denmark from investors from more than 70 countries. 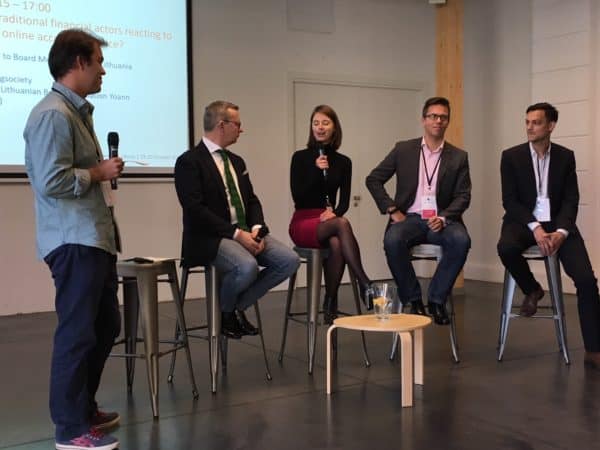 All participants agreed that new technologies such as APIs, big data, Blockchain, identification technologies, robo-advisors, and artificial intelligence (AI) are central to alternative finance. Yet, beyond the buzzwords, creating true customer and shareholder value from technologies remains a challenge. The irruption of ICOs as a disruptive form of crowdfunding is a powerful reminder of how the sector needs to continue pushing the envelope if it wants to remain competitive.

Ingi Sigurdsson, CEO, Karolina Engine, claimed that artificial intelligence enables the platform to predict the success of crowdfunding campaigns with 80% accuracy. Mads Dalsgaar CMO, Funderbeam, explained how Funderbeam uses Bitcoin’s blockchain to register, clear and settle the trading of private companies’ shares. For Rein Ojavere, CFO of Bondora, technology enables his lending platform to “cut through the layers of fat” of multiple investment intermediaries. In the same vein, Lasse Mäkelä, CEO of Invesdor, called his company a “digital investment bank.”

The technological advantage of Fintech startups over incumbent financial institutions lies less in which technology they use, than in how much customer value their innovations deliver and how efficient their innovation process is. Pietro Cesati, co-founder of Italian consumer crowdlending platform Soisy, summarized it well:

“Technology is only one part of the innovation we do. We have an entire graveyard of technology innovations. I worked for 12 years in a bank and such a [rapid] innovation process would not have been possible. In terms of lending, we’re only at the beginning of exploring what an online loan could be. We have more opportunities that we can explore.” 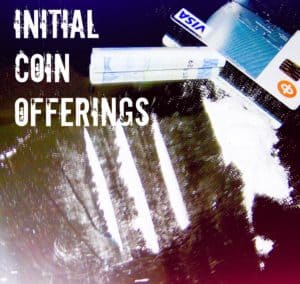 “The banking industry has been an industry needing change for quite some time and fintechs are pushing it to accelerate change. Now, the bankers understand that customer centricity is needed… The problem is that the pace of change has accelerated in a risky way. If there is a fintech investment bubble and if it bursts, it would hurt both [banks and fintech startups].

The accelerated, indeed supercharged pace of innovation is currently most striking in the area of cryptocurrencies and Initial Coin Offerings (ICOs). As ICOs head towards raising $3 billion in 2017 alone, they demonstrate the disruptive power of a decentralized and largely unregulated crowdfunding process. Robert Michels, Managing Partner at law firm Dentons in Germany called ICOs “crowdfunding on cocaine”:

“The industry needs to be concerned with ICOs. ICOs are crowdfunding on cocaine. There are 7 or 8 ICOs every day, every day lost is investor protection lost.” 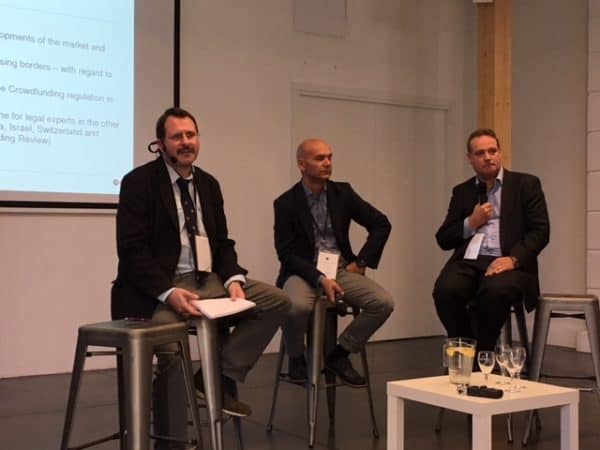 Not More but Better EU Regulations

Yet, while positive for the growth of internal markets, national regulatory regimes are too disparate to facilitate cross-border trading. Instead, they hinder the international expansion of online platforms and, hence, the long-term growth of the sector.

As Peteris Zilgalvis, Head of Unit Startups & Innovation, DG Connect and Co-chair Fintech task force at the European Commission reported, the public consultation on Fintech conducted by the European commission earlier this year showed that sector representatives call on the EU and national regulators to overcome this regulatory fragmentation.

Until now, the EU had adopted a hands-off approach to crowdfunding and lending regulation, which was not included in the program of the Capital Markets Union (CMU). The next two years could be crucial for the harmonization of crowdfunding rules in the EU and Peteris invited participants to engage with the DG Financial Stability, Financial Services and Capital Markets Union (FISMA) on the issue. 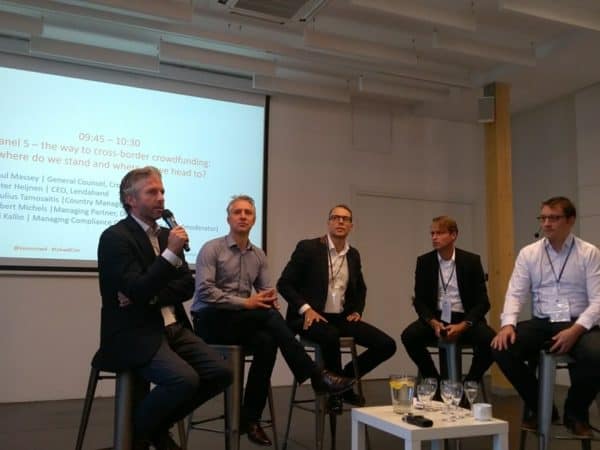 Paul Massey, General Counsel at Crowdcube and member of the board of ECN, agreed. Positive regulation is indeed achievable when industry and regulators engage with each other. It has been the case in the UK with the Financial Conduct Authority and at European level with the Commission and EU authorities working on the new EU Prospectus Directive:

“Good, smart regulation is at the heart of what we do… Seeing the threshold of the prospectus [exemption] rule move from €100K to €1 million was quite an achievement ‒ the ECN played quite a role in the change.”

Likewise, Lasse Mäkelä, CEO of Invesdor and Dan Rajkumar, CEO of Rebuildingsociety, are quite positive of the new payment directive, PSD2. According to Dan:

The issue of cross-border crowdfunding and lending goes beyond the absence of sector-specific regulation. Problems also arise from how existing EU banking and investment directives are interpreted and applied at national level.

Several platforms, such as Finnish Invesdor, French WiSeed, or Dutch Lendahand, have chosen not to use a simplified, crowdfunding-specific regulatory status. Instead, they chose to be fully regulated as Investment Services Providers (ISPs) in compliance with MiFID regulation. In theory, this status enables them to operate in any European country.  In practice, however, Peter Heijnen, CEO of Lendahand found that, despite the high costs, being fully regulated does not necessarily mean being able to operate easily across borders:

“With our MIFID license, we thought we had a passport [to operate in every EU country], but when we asked the national local authorities, nobody answered. The UK said we need FCA authorization. Only Finland and Luxemburg accepted us.” 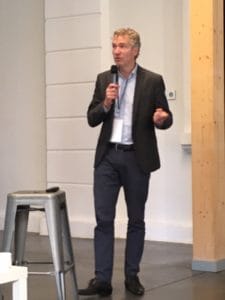 In addition, cross-border online finance faces many national differences in other areas of regulation such investors’ income taxation, corporate law, and civil law. In Lithuania, for example, married borrowers need the consent of their spouse, said Evaldas Remeikis, of P2P lender Paskolu Klubas.

When Aki Kallio (Danske Bank) asked the audience to indicate by a show of hands whether they thought a crowdfunding-specific EU-wide regulation was needed, very few participants raised their hands. Most said they believe that the EU already has all the core set of laws it needs to regulate alternative finance. The hope is that, as the Commission examines the harmonization of crowdfunding and crowdlending rules, it follows the principles of simplicity and proportionality. In short: not more, new rules, but harmonized and pass-portable exemptions and adaptations.

The final word on regulation was the call to action of ECN’s Executive Director, Oliver Gajda:

“The industry should appreciate the efforts of the EU. It has been only 5 years since we at ECN started engaging with the European Commission on these issues. The next two years could see important proposals for the harmonization crowdfunding and crowdlending rules. But nothing will happen if the industry does not fully engage in the discussions.”

A decisive demonstration of the sector’s engagement towards customers and regulators is the setting of self-regulation standards.

Tero Weckroth, Chairman of the board of Invesdor and Coenraad De Vries, Managing Partner, Startgreen Capital are both members of the ECN board.  They presented the work of the ECN task force on standard industry Key Performance Indicators (KPI). These KPI, adopted by the ECN board this summer, include data such as subscribed vs invested volumes, IRR, and default rate.

As of 2018, ECN member platforms are expected to collect and to submit these KPIs to ECN every year. Platforms are also urged to publish them on their websites in an easily readable format.

This level of transparency is indispensable if the sector wants to positively distinguish itself from traditional finance. Jorg Diehl of Aescuvest spoke in the name of investors and retail investors to stress the need for transparency and proactive communication from platforms.