Zurich blockchain hub Trust Square officially launched on Friday with an opening ceremony that was chaired by the Department of Economic Affairs of the Canton of Zurich, Carmen Walker Späh. Organizers of the hub reported that it is located right opposite the Swiss National Bank and is described as a center for research and development to facilitate the exploration of a broad spectrum of blockchain applications, the implementation of business models and the development of blockchain ventures. 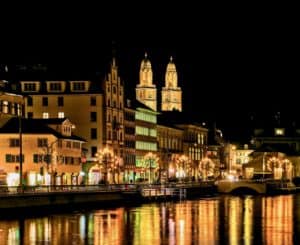 Trust Square organizers also reported that the hub offers space for 200 workstations, which are primarily meant for startups, researchers, and investors, who focus on various applications of blockchain technology. Ten desks are available to research projects from Trust Square’s academic partners ETH Zurich, University of Zurich, University of Basel and University of Applied Sciences Rapperswil as well as to its corporate partners Froriep AG and Rentsch Partner AG. Along with renting out office space, Trust Square will organize internal as well as public events and seminars about blockchain topics. The new centre aims to create a lively ecosystem in the heart of Zurich to complement existing initiatives in other parts of Switzerland and to help strengthen Switzerland’s position as an international blockchain hub.

“The topic of trust will strongly gain importance, both from a societal as well as from an economic point of view. Blockchain represents the crucial technology innovation to ensure this trust in today’s digital world. That’s why I’m thrilled to see our idea of a Zurich blockchain hub come to life today and to work with our partners to deliver vital stimulus for the future use of blockchain technology.”

“Trust Square further strengthens Zurich’s position as a centre for digital innovation and complements the diverse blockchain ecosystem in our region, consisting of university institutes and numerous startups. Our canton’s Business and Economic Development Division is working closely with Trust Square and actively supports the efforts to develop the Zurich area into a leading blockchain industry hub.”