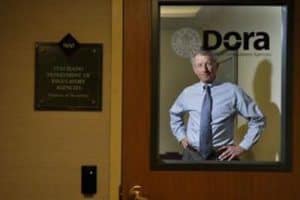 Three companies ordered by the Colorado Securities Commissioner Gerald Rome to justify their ICOs (initial coin offerings) in a live hearing before commissioners August 24th failed to appear, according to notice by the Colorado Department of Regulatory Agencies.

Expectations are there likely won’t be another hearing. A Colorado Department of Regulatory Agency (DORA) spokesperson speaking to Bitcoin.com, added that cease and desist orders are a likely next step:

“Given that no respondents showed, the Division presented the case to an administrative law judge, who must determine within 2 weeks whether the case made by the Division represents factual evidence. At that point, yes, the Commissioner will then issue cease and desist orders.”

The three firms: Bionic Coin, Sybrelabs Ltd. and Global Pay Net have been accused by the Colorado DORA of, “promoting unregistered Initial Coin Offerings in Colorado as part of an investigation into what has become a trend of allegedly fraudulent companies looking to make quick money.”

The Colorado DORA says that purveyors of the Bionic Coin ICO claimed on their website that the Bionic coin would, “enable instant payments to anyone, anywhere in the world,… simplify the purchase of electronic devices and software…(and) grow your money without any effort.”

As well, claims made by Bionic Coin that it was partnered with Forbes Magazine could not be confirmed by Colorado regulators.

Finally, the CDORA has accused Global Pay Net of attempting to sell their ‘GLPN’ ICO tokens by promising, “investors receive 80 percent of the company’s profits.”

Investigators found that the phone number linked to Global Pay Net is disconnected and, “no business filing is registered in Washington State where the company is supposedly located.”