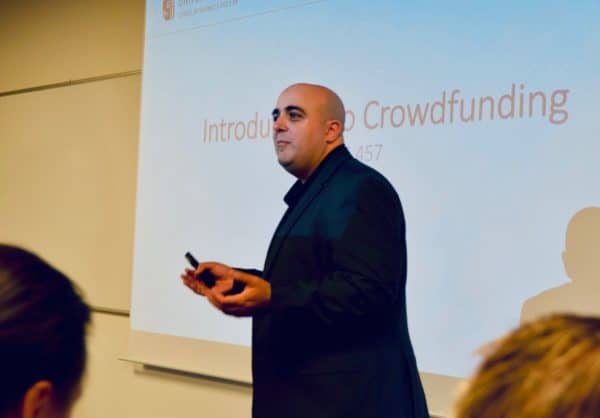 Innovation Norway and the School of Business and Law at the University of Adger (UiA) have partnered to offer a master’s course in crowdfunding. In addition to lectures and teaching, participating students will be working with real campaigns from real companies. Reportedly, more than 20 companies and organisations have agreed to take part in the course.

First announced in August, Rotem Shneor, an Associate Professor at the School of Business and Law and one of Norway’s leading experts on crowdfunding, stated at that time:

“We started research of, and education in, crowdfunding in 2012, and we decided early on that we wanted to develop a great expertise in this area. Nowadays, we are at an international level, and we want to provide master’s students with better insight into the different sides of crowdfunding.”

Recently, Frode Braadland from Innovation Norway explained to CI that many companies fail in early stages and two of the main reasons are lack of need in the market and too little capital. Innovation Norway obviously aims to boost entrepreneurship in the country so it makes sense if they look to alleviate one of the reasons undermining startup success – access to capital.

“Crowdfunding is still limited in Norway, but we consider it a good tool for entrepreneurs wishing to test whether the market is willing to support you in early stages,” said Braadland. “Hopefully it will reduce the risk of entrepreneurs launching products and services the market does not need while also providing important private capital in the early stages.”

Braadland stated that they have collaborated with UiA on several projects over the last 10 years and had very good results.

“We expect that both students and our companies will benefit greatly from participating, and hopefully it will result in more successful crowdfunding campaigns and better start-ups,” Braadland stated.

To help introduce the Lab, UiA held a session to present the concept and introduce some of the platforms which included both investment and e-commerce focused sites. According to UiA, the following investment sites participated in the session:

CI had the chance to discuss the Crowdfunding Lab with Shneor, an academician who has been an important supporter of the Cambridge Centre for Alternative Finance and their annual alternative finance benchmarking reports.  Our discussion is shared below. 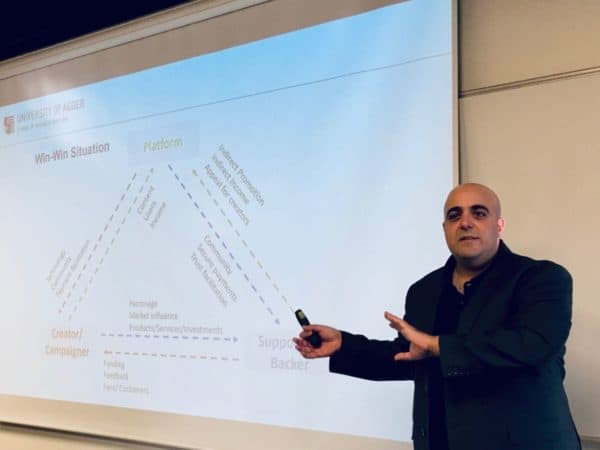 How did the Master’s Elective “Crowdfunding Lab” come to part of the curriculum?

Rotem Shneor: I’m fortunate to be affiliated with a university that both talks and actually acts on innovation.

We have supported entrepreneurship education and student venturing for many years but have constantly came across the chronic shortage of early stage financing that cripples many good initiatives.

About 7 years ago we discovered the then little known concept of crowdfunding, and have devoted immense resources and time into supporting this fledgling industry while researching it as it was emerging in our Nordic context. Through this work we understood that one of the major challenges is education, but at the same time have been accumulating first hand experience and knowledge into the world crowdfunding.

So, now, as the industry is gradually stabilizing and maturing, and as our knowledge about has become sufficiently substantial, the time is ripe for educating people about it. Both in terms of the opportunities and challenges it incorporates.

You have partnered with Innovation Norway. What type of support are they providing?

Rotem Shneor: They are supporting both financially and in out reach to potential entrepreneurs for the students to work with on creating real crowdfunding campaigns.

Here, entrepreneurs that apply for state support can be channelled and encouraged to consider crowdfunding with support of our students.

As far as I know, Innovation Norway is looking into crowdfunding more closely and using this partnership as a pilot, based on which this program may be further expanded and deployed to other parts of the country. In this sense, we are also indirectly training Innovation Norway itself in how to support entrepreneurs in terms of crowdfunding as well.

This is the first type of course in Europe – correct? Do you foresee other similar type courses to follow?

Rotem Shneor: As far as we know, this is the first one in Europe. There are some courses around Fintech or Financial Innovation elsewhere, but this is the first to take deep dive into crowdfunding in particular, offering both insights into theory and a hands on experience in building campaigns for real fundraising cases.

Overall, we were surprised by the level of interest in this course both nationally and internationally. So, I’m sure similar courses will follow in the future.

The demand for this kind of knowledge is real and substantial as part of a digital tool kit for future managers in general and those in small and medium sized business in particular.

Currently, the educational capacities in the field are limited but with time, more people will specialize in this area and will be able to educate others as well.

We have had requests from abroad to stream this course as well. Something we are considering in future rounds as we develop the course further.

What type of student interest do you anticipate?

Rotem Shneor: Currently, the first round of this course is open for master students taking business and economics degrees, including both Norwegian and international students on exchange at our school, as the course runs in English.

We have had interest from both bachelor students, students in different faculties and people from outside the university. So demand for this type of education seems to be high. Based on our experience, we will consider expanding this offering in the future also to other relevant groups, such as engineering and art students for example.

In any case, based on external interest, we have allowed a select number of external participants to sit through the course from local public and private entrepreneurship support agencies and incubators as guest listeners as part of doing our share in training the future trainers.

How will the course be structured? Will this be based on actual cases?

Rotem Shneor: The course is based on 8 intensive full days running during two months (and a total workload of around 200 hours during and between course sessions). The first half of the day is based on frontal lectures from academic and industry people (including – experts from different universities, platform representatives, campaigners of historical campaigns, etc.), and the second half involves intensively supervised group work where students analyze real cases with real companies and build a crowdfunding campaign for them.

Here, startup management works tightly with the students in choosing the right crowdfunding model, platform and creation of campaign materials . The end result is a report about all the analyses done, and the full campaign materials made available on a platform of choice. The companies then decide whether to go live with the campaign or not, as we are not allowed to formally raise funding for businesses. 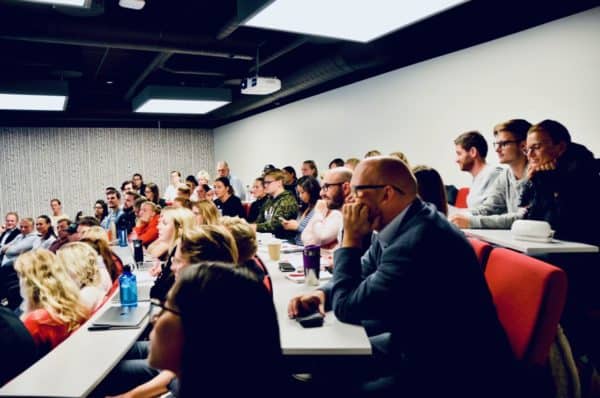 Securities crowdfunding in Europe is currently a patchwork of jurisdictions. The EU is working on addressing this challenge. Do you expect to see positive change in the near term?

Rotem Shneor: The EC seems to be committed to finding a way towards harmonizing regulation across Europe, and the last proposal coming from them last spring is quite a balanced approach. The challenge remains at the national level and the extent to which local governments will agree to such harmonization.

Part of the issue can be education, and through programs such as ours, a growing share of the public can better understand the opportunities and challenges, and in turn may also translate into pressure on relevant authorities to amend regulations.

Nevertheless, we do see more and more cases of platforms experimenting with the boundaries of existing license passporting solutions, and gradual accommodation of new regulatory environments. So, there is more work to be done, but growing volumes and pressures from industry players and platform users can help in pushing in the right direction.

Are you taking a pan-European approach for the course?

Rotem Shneor: Yes, when it comes to the course project, we encourage students to identify the right segments for each campaign internationally and not constrained to Norway.

Accordingly, we encourage them to identify and evaluate platforms best suited to serve these segments internationally, and examine relevant regulations that need to be accounted for under such environments.

In addition, we do present the challenges associated with international and Pan European campaigning in investment models via guest talks by legal experts, and representatives of platforms operating cross-border.

What about securities on blockchain or initial coin offerings. Will you be covering this in your course?

Rotem Shneor: We do not yet touch these in the current course format, but are likely to include them either in future versions of this course or in new courses dedicated specifically to blockchain and cryptocurrencies.

For the general public, what we consider as simple models of crowdfunding are still innovations that need to be digested and understood. So, we take it gradually.

Having said that, one of current cases the students are working with is an application of blockchain technology in a new approach to compensation for data sharing and impact via social network with a product called Deegram from a startup company called DecentralizeIT.