UK-based fintech Flux announced on Wednesday it secured $7.5 million through its Series A round, which was led by e.ventures, a global venture capital firm which has previously backed Farfetch, Sonos and Groupon, along with participation from existing investors PROfounders and Anthemis. 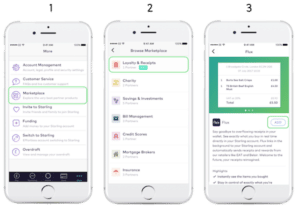 Founded in 2016, Flux is on a mission to “liberate the world’s receipt data” because it believes its insane that everyone still goes from paying with 21st century technology contactless cards to 100 BC technology of paper receipts as the only way of keeping a record of exactly what we buy in brick and mortar stores. It was revealed:

“Flux is regulated and authorised by the FCA as the first regulated Account Information Service Provider under new Open Banking regulations. We are working tirelessly to bring bricks and mortar shopping into the digital present. We already have major partners like Barclaycard, Costa, pod, EAT., Barclays and Starling Bank.”

Flux also reported it became the first ever third-party native integration to Barclays Launchpad, the app where the bank tests new features to add to its flagship Mobile Banking app. Flux recently announced that high street brands like Pure are joining the service, on top of existing partners like Costa Coffee, EAT., pod and itsu. Speaking about the company’s growth, Matty Cusden-Ross, CEO and Founder at Flux, stated:

“Flux was born out of a simple idea, paper receipts in the 21st century is insane. They just don’t work with our digital lives and create an unnecessary environmental burden. Our mission at Flux is to liberate the world’s receipt data by doing so enriching trillions of experiences globally. We’re super excited to continue bringing our vision to life with our incredible investors at e.ventures, PROfounders and Anthemis.”

“We have been impressed by the traction the Flux team have made amongst large UK retailers and banks in a short timeframe. We see paperless data on spending as one of the last frontiers enabling a true shift to digital engagement within retail and are excited for the future with Flux.”